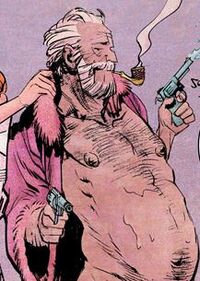 Flak is the C.E.O. of Flak Corporation, an entertainment conglomerate who pump people with addictive technology.

He hired Led Dent to take out Davey Trauma, a man with the ability to take over technology. Upon completion of the task, he congratulated them on helping him secure his empire against those who would bring harm. He next sent Led and Debbie on their next mission to Tokyo. He informed them about an EMP field protecting it from technology that he needed taken out.[1]

Retrieved from "https://imagecomics.fandom.com/wiki/Flak_(Tokyo_Ghost)?oldid=61502"
Community content is available under CC-BY-SA unless otherwise noted.