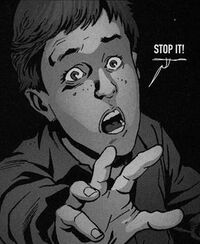 Flynn Lyons is the son of Hanson Lyons and Jennifer Lyons. He has a sister, Lacey Lyons, who grew up to be a huge movie star. Flynn always lived in her shadow and his father became her manager and always gave in to her ways.[1] However, Hanson became too controlling and abusive. He eventually began molesting and physically abusing his children. When Jennifer attempted to flee with Flynn one night, Hanson attempted to stop her. Flynn picked up a gun in the struggle and killed Hanson, freeing Jennifer and her family from his persecution.[2]

Retrieved from "https://imagecomics.fandom.com/wiki/Flynn_Lyons?oldid=49115"
Community content is available under CC-BY-SA unless otherwise noted.