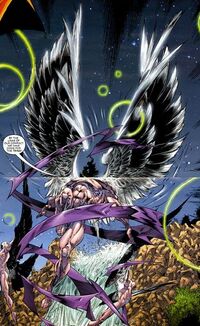 Official Team Name
The Forgotten Ones

Base of Operations
Earth
Affiliations

The Forgotten Ones are a group of Angels who refused to join in the war against Heaven. Since they neither supported, nor defied, Heaven, they were banished to Earth for eternity. They seek a tithing, called Tiend by locals, in order to sustain their existence. The Tiend occurs every seven years on various parts around the globe. When Spawn discovered their existence and protected one of their sacrifices, they challenged him to a series of feats. Spawn was able to pass the quests and denied the Forgotten One their Tiend and ended their existence. The Forgotten Ones cursed him for meddling in the affairs of the ordained and promised they would return the damage to him.[1]

Retrieved from "https://imagecomics.fandom.com/wiki/Forgotten_Ones?oldid=49279"
Community content is available under CC-BY-SA unless otherwise noted.