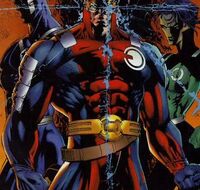 Foster McClane also known as Flashpoint is the name of a Superhero in the Wildstorm Universe that first appeared in 1993.

Foster was part of the first-ever StormWatch team founded in 1978. It included members such as Nautika, their training instructor Backlash and team leader Battalion. His initial attitude was sexist and racist, causing constant tension between Foster and his teammates who all were of various ethnic origins, gender and social and political backgrounds. Foster is best known in StormWatch's social history for his rivalry with Battalion. It was more or less a competitive and vengeful rivalry as at one point, Foster picked a direct fight with Battalion during some free time in Link Adam's workshop aboard Skywatch. When Battalion later died, Foster purposely picked a fight with Strafe. His "button-pushing" routine was not limited to just the King brothers. Foster almost came to blows with teammate Sunburst after purposely messing up his name.

The most significant role Foster had during his time with StormWatch was his service time with StormWatch Prime. He was given his own command after Battalion was assigned leadership of StormWatch One, with the hope of easing the hostile tensions between the two men. Although, a three-person team including Sunburst, Flashpoint and Nautika, they were assigned to various missions, including their ill-fated tour of duty in Kuwait during the Desert Storm Operation. Foster and his team were taken prisoner and held for several long years until Battalion led a rogue team including Fuji and Hellstrike to rescue them.

No one realized that the rescued team of StormWatch Prime had been "programmed" by Lord Defile to be his future spies to follow his every order. Flashpoint was the first to break the control over him and tried to beat some answers out of their former captor Deathtrap. However, Nautika and Sunburst, following instructions from Synergy, intercepted Foster after he began killing members of Deathtrap's mercenary team, beginning with Kilgore. Foster was finally neutralized by an electro-shock by Nautika during his sewer fight with Deathtrap as he was standing knee-deep in water at the time. Foster was then arrested and held in U.N. custody. Synergy visited him and informed him of the charges brought against him and the overall events taking place in his absence. Foster pleaded his case to Synergy about he and his team were mentally altered in some way during their imprisonment by Deathtrap. Synergy made no indication of believing him and left him locked up. Foster consequently missed action during the Wildstorm Rising event as only Nautika and Sunburst were permitted to report to duty. It is suggested that StormWatch Prime was ultimately no more.

By the time Flashpoint returned to active duty, he had become a willing double agent for the MERCs and began a relationship with Razor. When Stormwatch was assigned to protect Gamorra from the former Team 7, Flashpoint went to a local bar where Brutus fought him in revenge for Kilgore's death. After Flashpoint defeated Brutus, Razor explained to Foster that Brutus didn't know about his spy status, because he would have likely revealed it. [1]

Kaizen Gamorra hired the MERCs to protect the country, so Stormwatch and the MERCs made an uneasy alliance until Flashpoint decided to kill Battalion (against Deathtrap's orders) and revealed his double agent status. When Flashpoint tried to strangle Battalion, Battalion used his psychic powers to kill Flashpoint. [2]