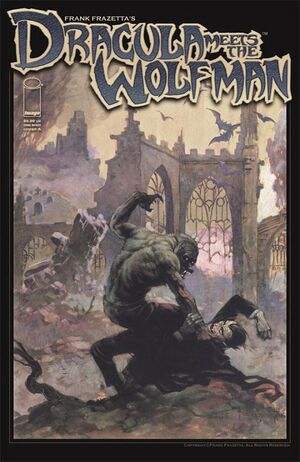 Forgive my haste. I am returning from travels far away and stopped for an evening of feminine enchantment... and a little fresh blood.

Appearing in "Dracula Meets the Wolfman"

1849
In the country of Moldavia in 1849, Nicholae Bulinski looks upon his lover Marta as she returns to her farmhouse. He wants to go to her, but realizes too late that the moon is full. As the moonlight beams down, Nicholae transforms into a Wolfman. Even as a beast, Nicholae cannot bring himself to risk harming his beloved Marta, so he dashes off into the forests.

Meanwhile, Marta's mother speaks with her daughter about a pending meeting with an important Count. Marta doesn't wish to meet this man, and does not like the prospect that her mother is hoping that she will wed the count.

Deep in the woods, Nicholae's father and brother, aware of his transformation into a werewolf, set a trap for him. They bait the Wolfman into chasing an untethered horse down a trail. As the Wolfman gives chase, he finds himself ensnared in a net. The father and brother quickly collect him and secure the Wolfman inside their carriage. This only briefly detains him however, and the Wolfman breaks free and races into the woods.

Meanwhile, Marta is taken to Castle Peles where she meets the count. The count is in fact the vampire Dracula, who has decided to take advantage of Marta's feminine wiles -- as well as her blood. As Dracula reaches for her, the Wolfman appears on the parapet of the castle window. He leaps at Dracula and a savage battle ensues. The Wolfman maintains the upper hand and their fight carries out into the courtyard near the cliff's edge. Dracula finally gets an advantage and uses it to grip the Wolfman firmly about the throat. Marta appears behind them and tries to impale the vampire with a broken weather vane. Dracula lashes out at her, and Marta falls backwards, impaling herself on an upturned piece of wood. She dies moments later. Dracula turns before the Wolfman can react and kicks him over the edge of the cliff.

2008
An airplane touches down an undisclosed airfield. Dracula exits the ramp and greets his driver who is waiting for him. Suddenly, the Wolfman appears and decapitates the driver with one savage stroke from his claws. Both creatures recognize each other and are eager for a rematch. They leap towards one another, fangs bared. The battle promises to be a brutal one.

Retrieved from "https://imagecomics.fandom.com/wiki/Frank_Frazetta%27s_Dracula_Meets_the_Wolfman_Vol_1_1?oldid=33907"
Community content is available under CC-BY-SA unless otherwise noted.