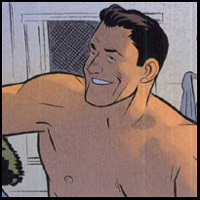 Katharine Hepburn introduced Frank to her good friend, Dr. Richard Conrad at a party she was hosting at her home for gay and lesbians in the film industry.

Frank and Richard became very good friends until Richard was blackmailed by the F.B.I. director, J. Edgar Hoover. J Edgar Hoover discovered that Richard was really the super-hero Blue Bolt from the Union of Justice, and he wanted to control the group by any means possible. This led to Richard breaking things off with Frank and Richard's attempted suicide.

Retrieved from "https://imagecomics.fandom.com/wiki/Frank_Gardner_(Jupiter%27s_Legacy)?oldid=61842"
Community content is available under CC-BY-SA unless otherwise noted.