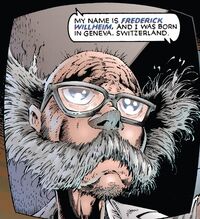 Dr. Frederick Willheim worked as a front-line medic, in exchange for physician training, when the war broke out in Europe. He met a woman who would change his life forever, Anna Willheim, in his fourth year of service. Soon, she began suffering from an unknown neurological disorder and went through several miscarriages. As a neurologist specialist, he stopped at nothing in experimenting to save her life.

Later learning of his research, the U.S. Army invited him to visit their cybernetic simian project. When Anna passed away, Willheim began research to transfer human brain patterns into an ape with an 80/20 distribution. He felt this was the only way to bring his Anna back to life. When his apt research project, Cy-Gor, moved on its own free will and without cybernetic enhancements, he knew it was time to experiment on Anna.

After suffering a stroke, he found himself unable to take care of Cy-Gor or himself anymore. He ended up preserving his brains to one day save his wife.[1]

Retrieved from "https://imagecomics.fandom.com/wiki/Frederick_Willheim?oldid=33741"
Community content is available under CC-BY-SA unless otherwise noted.