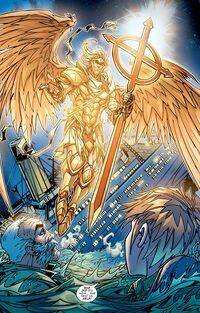 Through your grace, you shall be saved, for I AM YOUR SAVIOR!

Gabriel is an Angel who betrayed Heaven to join Hell in a test.

Spawn was sent back in time to the sinking of the R.M.S. Titanic, where he was offered a chance to save the lives of a father and son who would die with the sinking ship.

However, Al knew about the dangers of messing with time. He was concerned his actions would cause Wanda or himself to not be born. He chose not to act and allowed the father and son to die per time's design. Gabriel attempted to coerce him into intervening but was unsuccessful. Spawn was sent back having successfully passed the test.

Retrieved from "https://imagecomics.fandom.com/wiki/Gabriel?oldid=66210"
Community content is available under CC-BY-SA unless otherwise noted.