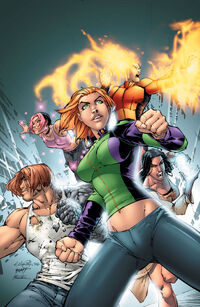 International Operations started "government internship" for gifted youths, taking place in an isolated training facility. Following the manifestation of Caitlin Fairchild, she fled the complex with Roxy Spaulding, Grunge, and Threshold in disguise. They were later joined by Sarah Rainmaker and Burnout. The project was revealed to be a gathering of the gen-active progeny of Team 7.

Threshold tricked the group, sans Fairchild, to return to base to help free the other kids, but upon their return they were apprehended for further testing. With the help of Pitt and John Lynch, the kids finally escaped. The group retreated to La Jolla, California, and officially formed as the group Gen¹³. They opposed IO and their ultra violent counterpart DV8. Gen13 loosely refers to the 13th generation of Americans. This makes Team 7 Gen12.

The team spent a lot of time delving into the past of Team 7 to learn more about themselves. Fairchild and Freefall learned they were half-sisters and Lynch was revealed to be Burnout's father. Also during this time, Freefall and Grunge began to date, while Rainmaker revealed herself to be a bisexual.

The team was caught in an explosion of a 6 megaton bomb and believed to be dead. Fairchild was the only survivor and mentored a new Gen¹³ team, effectively taking Lynch's role. This team formed in what's later revealed to be an alternate reality which was similar to the mainstream Wildstorm universe except for its point of divergence, the last issue of Volume 1. At the end of volume 2, the rest of the original Gen¹³ team was revealed to be alive and, after a little time-travel to avoid the detonation that 'killed' them, the reunited group returned to the mainstream Wildstorm universe.

In early 2006, Wildstorm brought all its in continuity comics, since WildC.A.T.s #1, to an end. The universe's finale came in the form of the crossover miniseries Captain Atom: Armageddon. Following the conclusion of this limited series, the entire Wildstorm line was relaunched with "Worldstorm." Along with the relaunch of Wildcats, The Authority, etc., came a new Gen¹³ series. The entire world has had a "soft reset", the surroundings are mostly familiar, but there are changes throughout.

In the first arc, the future Gen¹³ are taken away from their homelife. Their upbringing is revealed as a sham, with foster parents assigned to raise the children differently to encourage different personality traits. In different areas of the country, Caitlin Fairchild, Roxy Spaulding, Grunge, Bobby Lane, and Sarah Rainmaker wake up, each wearing a uniform recognized by their parents. Immediately following, strike teams attempt to capture the kids, with many of the foster parents being terminated.

The original line up of Gen¹³ was:

Gen¹³ is a superhero team and comic book series originally written by Jim Lee and Brandon Choi and illustrated by J. Scott Campbell. It was published by Wildstorm under the Image Comics banner. The comic features a loosely-organized team of super-powered beings composed of five teens (three girls and two boys) and their mentor.

The series takes place in Jim Lee's Wildstorm universe, and Gen¹³'s stories and history intertwine with those from his own works, such as Wildcats and Team 7 (in fact, each of the main characters in Gen¹³ was the child of a Team 7 member). The title featured flashy graphics and was noticeably more risque than other titles of the time, such as X-Men, so it quickly grabbed the attention of a loyal audience.

The original working title, Gen X, was changed to Gen¹³ after Marvel Comics threatened legal action against Wildstorm for use of their "X" trademark which they wanted to use on a X-Men spinoff curiously named Generation X right after Gen¹³ debuted to blockbuster sales. It didn't help that Wildstorm founder Jim Lee had recently left Marvel as their all-time best-selling X-Men creator to start up a competing company. However, the hard feelings did not last long as Lee helped Marvel revamp some of their characters (Iron Man, Fantastic Four) through Heroes Reborn.

The teens were originally invited to take part in a government project, but when they learned that the project was actually a prison-like testing ground on "Gen-Active" teens, they made their escape, but not before they "manifested" superhuman powers, and they were labelled dangerous fugitives. Their only hope was to rely on each other to fight their foes and unveil the personal secrets that linked them to Team 7 and International Operations.

After a very successful run, co-creator and illustrator J. Scott Campbell handed the reins of Gen¹³ over to other creative teams, and moved onto his own new mega-hit series Danger Girl.

Following the run of Choi and Campbell were John Arcudi and Gary Frank. Their realistic style, both in writing and art, were too drastic of a change for most fans who had appreciated the title's more fantastical elements. Following their run, Scott Lobdell returned the title to its less serious, more sexual roots, but still fans did not receive the title well.

After Lobdell's run, Adam Warren was assigned to the title. He had previously proven himself writing two miniseries using Gen¹³ characters (Grunge: The Movie and Magical Drama Queen Roxy) as well as a two issue fill-in piece featuring a pop idol who threatened to take over the world with a catchy song. Warren's run was well-received by fans and critics, but sales did not support the title.

Despite outrageous story arcs and many artist collaborations, the popularity of the book dwindled to the point where Wildstorm decided to blow up the entire team with a 6 megaton bomb (#76, July 2002). This served as the catalyst to revamp the series with a new number one issue written by Chris Claremont with pencils by Ale Garza. This title featured an all new team mentored by Caitlin Fairchild, however, this title was cancelled after barely a year. The final issue of the series revealed that the original team was, in fact, still alive, and that the new series had taken place in an alternate dimension which had in some fashion crossed over with the known continuity.

During the height of its popularity, Gen¹³ spawned two spinoff books, DV8 and Gen¹³ Bootleg as well as a number of one-shots and mini-series. The team also starred in crossovers with other comic book characters such as Superman, Spider-Man, the Maxx, Monkeyman and O'Brian, two crossovers with the Marvel Comics teen hero team Generation X and a crossover with The Fantastic Four. At one point in the early years, Wildstorm and DC were planning a teamup between the team and Batman. However, due to unknown reasons, the crossover never happened, though J Scott Campbell did create artwork showing Fairchild, Grunge, Roxy, and Batman in a promotional image.

Rebooted in October 2006, the current publication of the title Gen 13 Volume 4 written by Gail Simone with art from Talent Caldwell, bears no continuity ties to previous volumes or series.

Gen¹³ was subjected to controversy early in its run mainly due to J. Scott Campbell’s depiction of the female form. Although comic books of the time were well known for exaggerating the feminine form to physically improbable standards, Campbell was particularly risqué in that stories often involved the main character, Caitlin Fairchild, a teenager, wearing as little clothing as possible, without causing the book to be forced to show a warning of its content.

In the second issue of the ongoing series, the character of Sarah Rainmaker was revealed as being a lesbian. Criticism came from all sides over this issue. Many suggested that this was entirely conceived to titillate male readers while the following issue’s letter pages were filled with letters protesting that lesbianism was not appropriate for comic books. Meanwhile, critics from the gay community criticized Rainmaker's portrayal as a flighty lesbian when, in the next few issues, she made out with her male teammate Burnout while drunk.

In addition, Native American critics noted that Rainmaker was the latest in a long line of exotic [1] Indian princesses meant to titillate white males with a hint of forbidden sex.

The series also received some controversy from the fans when it was made known that a panel showing Sarah Rainmaker sharing an open mouth kiss with another woman was replaced with one of a tepid kiss on the forehead. However, J. Scott Campbell has commented on several occasions that the editorial move was a suggestion, not overt censorship, and he agreed with the editor that the original version of the kiss did not suit the story.

Gen¹³’s most obvious influence is Marvel’s X-Men which originally featured five young friends who were trained in secret by an older man who tried to protect them from a dangerous world. Many of the more social aspects of the team were inspired by the second generation X-Men spin-off series: New Mutants.

The character of Rainmaker highly resembled the X-Men’s Storm in that both characters had weather controlling powers and little modesty which led them to frequent skinny dipping.

Also, the character of Freefall had her direct parallel in the character of Jubilee, both of whom had similar attitudes and physical attributes, including being the youngests in their respective teams. Freefall also had an unearthly pet, Qeelocke, which parallels the baby dragon Lockheed belonging to Kitty Pryde of the X-Men.

John Lynch was inspired by Clint Eastwood both in appearance and personality.

Many of the early Gen¹³ adventures also paralleled the X-Men. In issue #2 of the ongoing series, the team fought Helmut, a practically unbeatable armored opponent with a vendetta against the team’s mentor, similar to the X-Men’s Juggernaut. In the next five issues, the team went on an inadvertent world tour, similar to early adventures of the “All-New, All Different” X-Men of the 1970s. After their mansion was destroyed (a recurring element of the X-Men comics), the team went to a prehistoric island (similar to the X-Men’s Savage Land), before going into outer space (X-Men’s Phoenix Saga), and returning to a dark future (X-Men’s Days of Future Past). Most of the X-Men parallels faded after this point when Brandon Choi was replaced by John Arcudi as writer on the series, however it is worth noting that when WildStorm decided to revamp the series, they hired perennial X-Men writer Chris Claremont to do the job.

Gen¹³ also highly embraced the MTV Generation and built its sense of style on what was the contemporary fashion at the time including the name Grunge (which was a quickly dated reference), references to popular bands such as Soundgarden, and a youthful drama inspired by MTV’s The Real World. Not coincidentally, Gen¹³’s editor was Sarah Becker, a cast member on The Real World: Miami.

Kevin Altieri (Batman: Mask of the Phantasm) directed a Gen¹³ animated feature for Buena Vista Pictures, a Disney company. It was shelved by Disney soon after Wildstorm was bought by DC Comics, a Time Warner company, and never released in the U.S., but has seen a limited video release in Europe and Australia. Grunge was voiced by Flea of the Red Hot Chili Peppers.