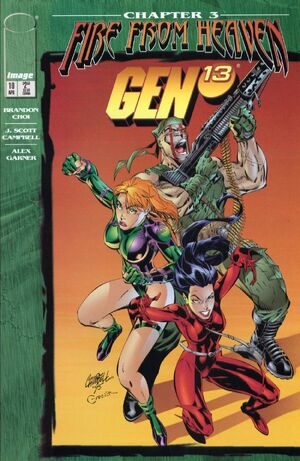 Appearing in "Fire From Heaven, Chapter 3 of 14: Rumble in Gamorra"

Plot Synopsis for "Fire From Heaven, Chapter 3 of 14: Rumble in Gamorra"

The beach battle between Stormwatch and Team 7/Gen13 continues here from chapter 1. It looks like the Stormwatch agents are winning, but then Deathblow, Lynch, Sigma, and Rainmaker show up and turn the tide. Deathblow and Lynch combine their Gen-Factor powers to take out Fahrenheit. The victors then head out. When the Stormwatch operatives regain consciousness, they fire into the jungle to try and stop the others, but they don't notice an incoming tidal wave caused by the earlier earthquake. Flashpoint and Cannon are hit by the wave, and Fahrenheit leaves to get help.

In a seedy Gamorran bar called Kahunas, former Team 7 members Alex Fairchield and Lucius arrive to meet with their contact. They learn of the death of Miles Craven and also that Stormwatch has arrived to deal with some of their Team 7 teammates. They also find out about the capture of Freefall. At Kaizen Gamorra's compound, Freefall and Dr. Tsung are questioned about the location of Sigma. Kaizen reveals that he's created Gen-Omega, a a clone of Sigma, using information Miles Craven obtained from Gabriel Newman, who was a mole during Project: Genesis. The sensor alarms go off, and Kaizen learns that the team of gen-actives known as DV8 is also on his island along with their leader Ivana Baiul, who is aware of the Gen-Omega. He sends his state-of-the-art Orca droids to deal with them. The Sword of Damocles and the Bounty Hunters then leave Kaizen and head to the moon, where they attack the United Nations Moonwatch Command and begin to prepare the way for Damocles.

The members of DV8 make short work of Kaizen's droids, but he is unconcerned. He and Le Gauche leave to activate the Gen-Omega, leaving Freefall and Dr. Tsung alone. Tsung recounts his nightmares of Damocles conquering the world and how Sigma is their only hope. Outside the compound, the group consisting of Team 7, Gen13, and Mother Goose infiltrate the compound using a secret entrance that Deathblow learned about. They attack the guards and in short order, Dr. Tsung and Freefall are freed. They are celebrating their victory when Ivana Biaul and DV8 enter the room and prepare to attack.

Elsewhere on the island, Burnout and Crimson hide from stealth choppers and force their captive Aries to lead them to Kaizen's compound. Back at the compound, DV8 attacks Team 7/Gen13. DV8 seems to have the upper hand but then Sigma takes out Threshold and Deathblow fires an apparently fatal round of machine gun fire through Evo's chest.

Sigma begins to feel woozy because his Gen-Factor is being siphoned away by the awakening Gen-Omega. However, he is able to lead the group to the Gen-Omega by sensing his location. They arrive just as the chamber holding Gen-Omega opens, and to their surprise and horror, they see that Gen-Omega is none other than a resurrected Miles Craven!

Retrieved from "https://imagecomics.fandom.com/wiki/Gen¹³_Vol_2_10?oldid=68550"
Community content is available under CC-BY-SA unless otherwise noted.