"...Where Angels Fear to Tread..."
Part of the New Horizons 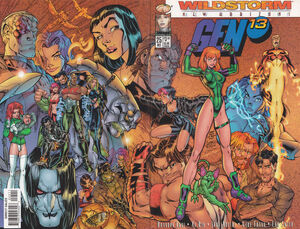 Appearing in "...Where Angels Fear to Tread..."

Plot Synopsis for "...Where Angels Fear to Tread..."

Maggie Monroe masquerades as an IO watch officer and infiltrates the agency’s Manhattan archive. Simon Tsung aids her via commlink while he simultaneously copes with his daughter’s vocal jealousy of Sigma.  Monroe enables Gen 13 and Sigma to sneak into the IO building disguised as a cleaning crew.  Once inside, they ditch the ruse and fight their way past IO security personnel. IO Director Ivana Baiul becomes aware of the breach and sends Black Razors in to kill them.  In the middle of the battle, Fairchild, Freefall, and Grunge arrive from the future and turn the tide in Gen 13’s favor.  They make their way outside the building where IO Warhawks are waiting for them.  As Sigma and the team fight, Baiul herself appears and attacks Lynch.  Monroe saves him by blasting her with a gun just as Tsung drives up in a getaway vehicle.  Tsung triggers an electromagnetic pulse which shorts out the Warhawks’ armor and covers the team’s escape.  The police arrive as Baiul vows revenge.

Gen 13 have moved into a new safehouse in Manhattan set up by Maggie Monroe.  Roxy invites Caitlin to join the rest of the team in Times Square to celebrate New Year’s Eve.  She initially declines but changes her mind when Lynch asks to review data with her.  Roxy and Grunge get into a snowball fight amidst the crowd while Caitlin ponders her unease with Lynch based on the brutal, ruthless version of him she met in 2027. Roxy hits a bystander with a snowball, leading to a confrontation, but Caitlin talks both sides down.  The team then watches the Times Square ball drop, heralding the new year.  Back at the safehouse, Lynch sees a news report portraying him as a terrorist.  Realizing Ivana Baiul is responsible, he declares war on her.

Retrieved from "https://imagecomics.fandom.com/wiki/Gen¹³_Vol_2_25?oldid=69856"
Community content is available under CC-BY-SA unless otherwise noted.