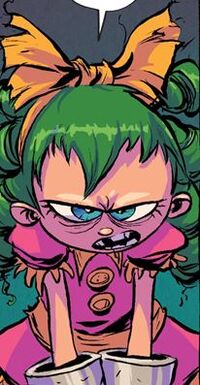 Alright, boys, who wants to eat some of this?

Gertrude was a young girl when she wished to be whisked away to a land of fairytales and magic. Her wish came true and she found herself stuck in Fairyland. She was appointed Larry as a guide to leave within the next few days. However, they became horribly lost and spent the next twenty-seven years stuck in Fairyland.

Gertrude became a tyrant of the land with a short temper and diplomatic immunity where Queen Cloudia was required by law to not harm her.[1] Gertrude took the lack of supervision to her advantage and terrorized the land looking for her key, killing anyone who crossed her.

However, Queen Cloudia soon sent assassins in her place. Including Horribella, a witch who turned thousands of faun into zombies to attack Gertrude.[2] After killing them, she soon found herself face-to-face with a new child arriving in Fairyland. She introduced herself as Happy. When Gertrude tried to kill her, Happy shot her with a rainbow blast.[3]

Gertrude recovered and approached Queen Cloudia. Uncharacteristically, the Queen snapped at her but was unable to harm Gertrude due to the rules of Fairyland. As the Queen left, she warned Gertrude about Happy. When Larry checked the rule book, he realized Gertrude would become vulnerable as a permanent citizen if Happy found the key first. They agreed to set out to find one of the Evil Seven Dooms for help. They met with Darketh Deaddeath who agreed to give her his powers if she is able to survive his dungeon and prove herself worthy. Gertrude and Larry were suddenly plummeted into the bottom of his dungeon and faced with gigantic evil monsters.[4]

Gertrude vanquished all the bad guys in the dungeon and insulted Deaddeath. He was so impressed by her brazen attitude he gave her the powers she requested.[5]

Elsewhere, Happy found the key and was about to leave Fairyland, to the delight of all the inhabitants. However, Gertrude arrived at the last second and used her powers to kill Happy. She was about to put the key in the door when the Queen made a quip about there not being more death insinuating she wished that Gertrude had died. Gertrude turned and used her new powers to kill Queen Cloudia. However, the key suddenly disappeared. Larry informed her that whomever killed the queen, would become the new ruler of Fairyland and be stuck there forever.[5]

Retrieved from "https://imagecomics.fandom.com/wiki/Gertrude_(I_Hate_Fairyland)?oldid=60959"
Community content is available under CC-BY-SA unless otherwise noted.