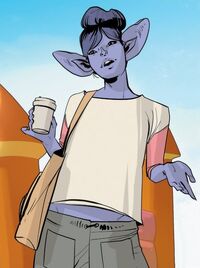 Ginny is a married dance instructor. When she begins teaching Hazel dance lessons,[1] she becomes too close to Marko to the point to where she would try to kiss him.[2] Marko soon let the planet, leaving Ginny behind.

Upsher, and investigative journalist, was investigating Marko and found a 'missed connection' article written by Ginny. He and his journalist partner, Doff, visited Ginny on Gardenia. She told them he was being chased by bluebloods and that the royal family was involved. The duo suddenly realized how deep the story was now that the royal family was involved.[3]

Retrieved from "https://imagecomics.fandom.com/wiki/Ginny_(Saga)?oldid=60209"
Community content is available under CC-BY-SA unless otherwise noted.