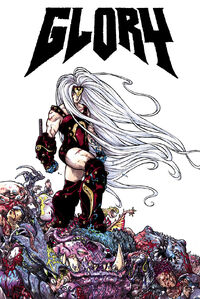 Glory is a character from the Awesome Comics comic book series created by Rob Liefeld. The character's full name is Gloriana Demeter, a half-Amazon, half-Demon warrior. The character was clearly meant to be a version of Wonder Woman in the Image universe, especially given the ties to mythology.

Glory was the result of an alliance between the Lady Demeter of the Amazonians and the demon Lord Silverfall of the Underworld against the human world. Raised in her mother's world and trained by the Amazonians, she emerged as their finest warrior. However, she also struggled to control the savagery which was her paternal gift/curse. Not at home in either Amazonia or the Underworld, Glorianna went to the world of man.

During World War II, Glorianna fought for the Allied forces against the Nazis, alongside Supreme, another Liefeld creation. She was part of the second and third Brigade teams with other superheroes.

Writer Alan Moore joined Image after having left DC Comics and spending a period of time working for independent companies. As he did on other Liefeld/Image works like Supreme and Youngblood, Moore relaunched Glory in March 1999 under the Awesome Comics line, blending mythology, adventure, and romance to the superheroine much as he would shortly do in his subsequent series for ABC Comics, Promethea.

In the retooling, Glory takes on a human identity as a waitress named Gloria West, in order to experience humanity. Only one issue was published (#0), but it was eventually republished with two additional issues for Avatar Press in 2001.

Glory was summoned by Lady Demeter to return to the Isle of Paradise. Celestine had taken control of her sister's minds. Upon arriving, she teamed up with Angela, another angel, to take down Celestine. Glory used her birthright of Atmokinesis to free the minds of her sisters. Celestine escaped in the commotion.[1]

On Orbital Angel Station, Celestine retrieved her true goal, Elemental Fire. The U.S. Government dispatched Youngblood and Team Youngblood to investigate the station, but found Celestine has already fled to the Middle East where Angela and Glory headed to cut her off.[2][3]

In the Middle East, Glory and Angela battled the angels Celestine, Astra, and Crystal. They were soon outnumbered as Celestine used the Elemental Fire to raise the dead to fight for her. As the dead were slowly beaten back by Angela and Glory, Celestine thew a fit. Glory pointed out that something was amiss as an angel would not summon the dead nor throw a fit. Angela and Glory are shortly thereafter saved as all the corpses ceased to move as Maximage cut off the Elemental Fire power source to Celestine.[4]

Celestine soon knocked out Angela and cornered Glory. Maximage, who recently received her powers, struck Celestine with all her might and revealed that Celestine was being controlled by Malebolgia. Malebolgia returned to hell with Celestine's soul.[5]

Angela and Glory agree to travel to Hell to retrieve Celestine's soul from Malebolgia. They were initially toyed with as Malebolgia revealed he is all powerful and would soon overthrow his boss. However, Lucifer suddenly appeared and vanquished Malebolgia as punishment. Lucifer then offered Celestine's soul in exchange for Glory's. While Glory hesitated, Lucifer revealed he didn't actually need her. Having freed Celestine, Glory returns to Washington, D.C.[6]

During Worls War II Glory was romantically involved with Suprene.

Glory was born with a tail but her parents cut it at birth.