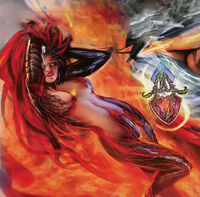 During the battle she attempts to wrest the power of the Angelus from Celeste Wright only to find herself banished from the area and transported to the Circumpolar Arctic. She manages to find her way back to her mentor is more determined than ever to unite the remaining 12 Artifacts.

Glorianna possesses the Ember Stone, a necklace with a red and gold medallion that has a fire stone embedded in it. The wearer is granted great power over fire and allows for shape shifting as well. It is the polar opposite of the Glacier Stone much like the Angel and Darkness.

The Ember & Glacier Stones are opposites similar to the Darkness & Angelus. They too have a balance that has not yet been named.