"Angels in Hell"
Part of the Rage of Angels 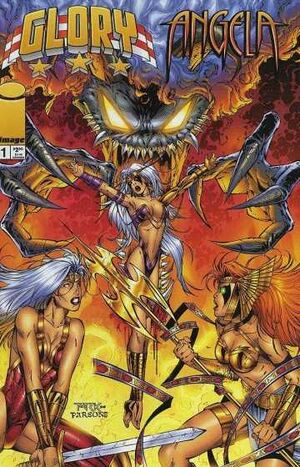 Appearing in "Angels in Hell"

Plot Synopsis for "Angels in Hell"

Glory follows Angela deeper into Hell. She recalls the events of Celestine stealing Elemental Fire to resurrect the dead. After defeating them, they remembers how they realized Malebolgia had been controlling her. Metatron then sent them to hell to release her.[1]

They arrive at Acheron and demand passage from the ferryman Charon. They are lead to the Land of Heretics where Celestine will be held. They are suddenly attached by a group of violent individuals and fight there way through them.

Malebolgia suddenly appeared and toys with the girls. He informs them they can't hurt him and he will soon be number one. Lucifer suddenly appears and asks Malebolgia if he really thought he would pull off a coup without him knowing. Lucifer them banishes Malebolgia back to the 8th dimension of Hell.

Lucifer says he will return Celestine if Glory offers her soul in return. After a brief hesitation, Glory agrees.

Lucifer returns Celestine and explains there are ten levels to hell. He shows them Elysium is actually one of the highest levels. Angela is dumbfounded at the news. Lucifer kisses Angela goodbye and says they will meet again soon.

Glory asks why Celestine won't forgive Angela and Angela explains it's complicated but she is a sedonist in her eyes. They bid adieu and promise to meet as friends next time.

This is the final issue in the Rage of Angels event. See Spawn Recommended Reading Order for more information.

Retrieved from "https://imagecomics.fandom.com/wiki/Glory_%26_Angela:_Angels_in_Hell_Vol_1_1?oldid=47106"
Community content is available under CC-BY-SA unless otherwise noted.