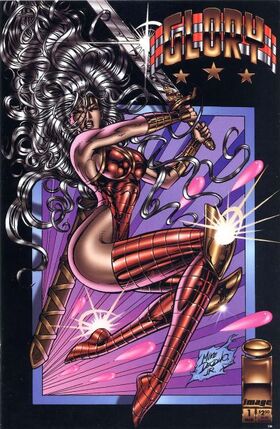 Appearing in "Who Wrote the Book of Love? part 1"

Plot Synopsis for "Who Wrote the Book of Love? part 1"

Mr. Factors, CEO of Factors Cosmetics, tries to convince Glory to become the spokesmodel for a line of perfume he has named after her.  Uninterested, she explains he has nothing new to offer her, recounting her decades-long superhero career and past romance with Supreme.  Watching outside through a window, her friend Leonardo Swann a.k.a. Vandal kills a spying bird.  It was an emissary for Glory’s father, the demonic Lord Silverfall, and his cousin Lady Tabitha who are monitoring Glory from his castle in the hellish Underworld.  When Glory rejects Factors’ offer, he berates and sexually harasses her.  In response, she backhands him.  One of his bodyguards pulls a gun, and she throws the man through the window.  Fortunately, he is caught by Glory’s other companion, the super-strong size-changing Flanders Edison a.k.a. Rumble.  Glory jumps down to the sidewalk, and Rumble reverts to normal human size.  He wants to show Glory an antique book he recently came across, but Vandal grabs him, and they leave for dinner.  Once they are gone, a demon lunges at Glory out of a nearby fountain.