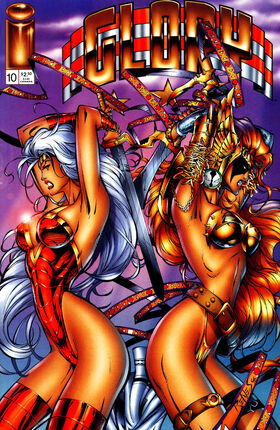 Glory recalls returning home from her battle with the Keep and being exhausted. She remembers his she had laid in the bath and received a call from her mother about Celestine attacking. She recalls heading to the Isle of Paradise and freeing her sisters from the mind control by Celestine.[1]

In the present, Angela and Glory track Celestine to the Middle East. Upon engaging in battle, Celestine summons the dead using the Elemental Fire she took from Orbital Angel Station.[1] As Celestine's warriors are slowly beaten. She throws a fit and Glory thinks the fit isn't like an angel. Only Demons throw such temper tantrums. She also wonders why Celestine would use her powers to raise the dead.

Suddenly, all of the troops have their power cut off and they drop motionless on the ground. Celestine curses as she knows Maximage interfered.[2]