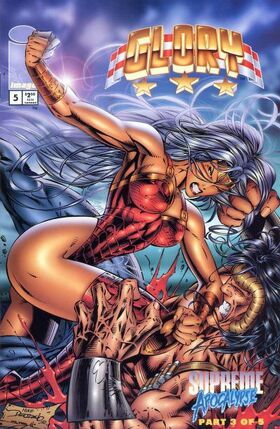 In a dream, Glory reminisces about her past with Supreme then sees him stabbed in battle by a member of the Decadence Cult.  She wakes up in her apartment and goes to meet with the D.C. police to tie up loose ends from the Book of Love incident.  As she is talking with Friday and Webb, the two cops who investigated her, they get word of violence at the Washington Monument.  Glory goes with them, and they find the Baptist and his cult preparing to conduct human sacrifices.  Glory calls Brigade in New York to come aid her.  She begins fighting the cultists while Kid Supreme, Grey, and Psi-Storm emerge from a crash tunnel nearby.  On D’khay, Darkthornn takes control of Prophet’s mind and has him stab Supreme, releasing enough energy to transport Darkthornn’s forces to Earth.  In D.C., Glory finishes subduing the cultists and prevents the Baptist from killing a baby by throwing Friday at him.  Just as Brigade arrives, Kid Supreme appears with the Berzerkers, describes Supreme’s capture, and explains Darkthornn’s invasion plan.  Suddenly, the Baptist fatally stabs himself, providing the last bit of energy required to open the portal to D’khay.  A horde of Disciples emerges with Prophet, now in Darkthornn’s thrall, as their leader.  Prophet boasts that he killed Supreme.  Enraged, Glory attacks him.