"Babewatch part 2"
Part of the Babewatch 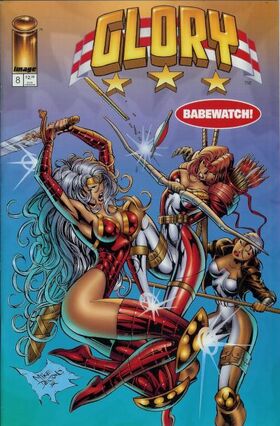 Beaten unconscious, Glory dreams Diabolique turns all the men in her life into females, leaving her alone in a world of women as she was for centuries among the Amazonians. Riptide wakes her up joined by Masada and Vogue.  Glory tells them of the First Pantheon, deities who created all magical beings, and explains that Diabolique has been feuding with Glory’s mother Demeter and the Amazonians for millennia.  Diabolique seeks control of Amazonia, the Isle of Paradise, because it is a source of mystical power.  To that end, she magically placed most of the Amazonians in stasis years ago, leaving only Demeter and her attendants to defend the island.  Glory discovered Diabolique’s weakness is water and used it to imprison her in the ice in the Himalayas.  The Isle can be reached using water as a conduit so Glory has Riptide use her hydrokinetic powers to transport the two of them, Masada, and Vogue there.  They arrive just as Diabolique and the transformed members of Youngblood in her thrall approach Demeter’s palace.  Glory and her allies battle Youngblood until she has Riptide hit Diabolique with a blast of water, subduing her.  Demeter and her attendants appear and congratulate Glory on her victory.  The transformation spell is undone, and the men of Youngblood are restored to their true forms.  Suddenly, a giant hand emerges from a portal in the sky, grabs a terrified Diabolique, and vanishes.  Demeter tells Youngblood they can count on her help if they ever need it.  She then takes Glory aside, explains that it is the First Pantheon who took Diabolique, and reveals that Diabolique is her twin sister and thus Glory’s aunt.