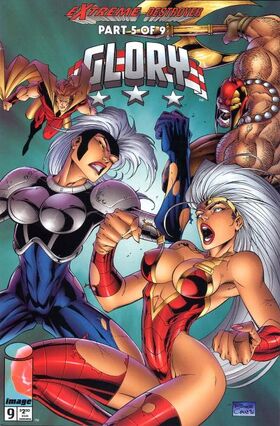 Appearing in "Extreme Destroyer part 5: The Violence of Truth"

Plot Synopsis for "Extreme Destroyer part 5: The Violence of Truth"

After the battle with Diabolique, Demeter explained to Glory that the Keep visited Earth eons ago and seeded the humans with the Nu-Gene.  Some with the gene became the First Pantheon and, in turn, the progenitors of the Amazonians.  The Pantheon left Earth millennia ago and their recent abduction of Diabolique worried Demeter.  Then, Glory abruptly vanished, and Demeter swore revenge on her kidnappers.  Now, in a cell aboard the Keep slave ship, Glory tries to lift the spirits of a sulking Shaft.  Their cellmate Elemental notices a commotion among the guards.  Aboard the Keep mother ship, the Shepherd helps the New Guard finish subduing Diehard’s strike team.  He then notes that Guard member Black Jack is missing.  On Earth, Rumble disappears from his and Vandal’s dorm room just before SuperPatriot arrives and tells Vandal about the Keep.  Vandal decides to go with SuperPatriot to Youngblood headquarters.  Aboard the slave ship, the New Guard come to take Glory to be branded.  She resists, but their leader Safeguard knocks her out. Elsewhere, Keep technicians prep Dash for branding.  The Shepherd enters and assures her she will come to appreciate her purpose for the Keep. In Mexico, Maximage appears to Dutch and Marla Thomas in their car and tells them to go to Peru.  In the distant future, Colonel Bravo and Link monitor the situation and, fearing disruption of their timeline, decide to intervene.