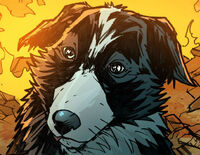 While Spawn lived in Limbo for many years, he was approached by God in dog form. God explained to Spawn that he created Earth and it was perfect and without flaw. As a result, Earth had no meaning. He created man as they are today so that it could provide meaning to his creation. He took away his omniscience on how man's story would end. Effectively blinding his to mankind's fate and granting free-will to humans.

God informed Spawn about the Devil and how they had attacked his wife, Wanda Blake and her unborn child. God then sent Spawn back to Earth and asked that he make the right decision and use his free-will intelligently. Before departing, he gave the Sword of the Spirit to him, a heavenly forged weapon to battle the demons.[1]

Retrieved from "https://imagecomics.fandom.com/wiki/God_(Spawn)?oldid=61719"
Community content is available under CC-BY-SA unless otherwise noted.