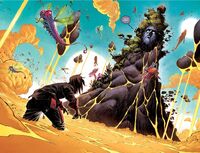 The Godhead exists on Godworld. When Grant McKay first came to the world, it took his memories.[1] When he learned to let go of his emotional baggage and move on with his life, he offered a chance to once again have his memories returned. However, Grant turned it down as he decided he would become his own man.[2]

Retrieved from "https://imagecomics.fandom.com/wiki/Godhead_(Black_Science)?oldid=54350"
Community content is available under CC-BY-SA unless otherwise noted.