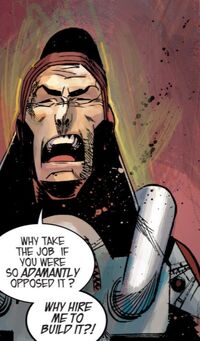 Institutional learning facilities are traps intended to control the mind, subdue your soul, and keep you in debt until you're too old to cause trouble

Grant McKay is the founder of the Anarchists League of Scientists. Grant dedicated his life to science including the research and invention of the Pillar. He frequently found himself at odds with Kadir who was driven to steal Sara McKay from him.

Grant grew up with his father and mother who had a difficult relationship. His father worked all the time and rarely made time for his family. He brought Grant along to his construction job every Saturday as his time and trade were all he could teach him.[1] His parents grew more distant and his mother despised his father for his worth ethic. Sandy McKay began cheating on Grant's father every Tuesday with a neighbor, Ron. When Grant was sent home from school one day, sick, he stumbled upon her secret. She told him a monster would attack him if he ever told her secret.[2]

His father began to feel like a failure. The constant chiding from his wife eroded his will to live and he was about to kill himself in the shed when Grant walked in on him. Grant told him it wasn't his fault. He told his dad how his mom had secret boyfriends. As a result of losing the last thing in his life he cared about, his wife's love, he took his own life that night.[3]

As Grant grew up with Sandy and Brian, he was constantly the outcast. Brian won popularity contests and was a normal boy while Grant became lost in his work like his father. His mother resented him for this and for telling her husband about her indiscretions.[3]

Grant went to college with Kadir and was always pompous.[4] Upon dropping out, Grant took job to pay for his wife and kids. He resented them for making him work for corrupt organizations.[5] He later convinced Shawn to drop out with the promise of working on something life changing, the Pillar.[6]

While researching the Pillar and the Eververse, Grant began cheating on his wife Sara with Rebecca, he found he was hopelessly charged to repeat his mother's mistakes.[7]

He drank with his friend Ward who was working security on the project. Ward warned him to appreciate all that he had -- his wife and kids. However, Grant was bitter and told him that those that seemed happy were just better at hiding the truth.[8]

One day, Grant brought his kids into work to demonstrate his life’s work, the Pillar. When the machine suddenly started counting down with the kids in the room, Grant and the Anarchists League of Scientists were thrust onto a journey of dimension hopping.[9]

While stranded, Grant, Rebecca, and Shawn attempt to rebuild the sabotaged Pillar. When Grant learns that it was sabotaged by Kadir from an alternate dimension version of himself, Grant thrusts himself at Kadir as they both fell into an icy volcano amidst a race of spirit creatures inhabiting monkeys. When Grant is crushed under a fallen Pillar, he protects his children the best he can, by asking his enemy Kadir to take care of them and return them safely to their mother. Grant passes out under the pillar as the rest of the crew continue their journey of dimension hopping.[9]

The sentient monkeys saved Grant from dying. They wanted off the planet so they forced him to perform research for them since he knew how the Pillar worked. However, Grant found a handheld device and used it to jump out of their dimension. He went dimension to dimension searching for his kids. He eventually ended up in the Middle East where he was attacked for his hand-held Pillar.[10]

After waking up, Grant tracked down Kadir III who attempted to give Blokk III the key to the Pillar. He eventually wrestled the Pillar free and teleported to the cave where Mia and Nate were being abducted by Grant II and Sara II. As he watched Grant II die, He told them they need to travel to the center of the Eververse to stop time from unraveling. He informs them time is repeating itself in every dimension and will unravel unless they stop it.[11]

The group teleported away from the Dralyns. After a group argument, 2nd dimension Sara escaped and Pia chased after her. Grant donned a suit and began searching for them before next world jump.[10] They discovered a lab where the 5th Dimension Grant McKay had unleashed a virus upon the world and they were now being hunted due to his actions.[5] Grant agreed to heal the virus from world when Shawn convinced him the jumps aren't random and that they are specifically heading to other Dimensionaut's dimensions.[12] Grant grabbed the Shaman's device to release a cure in the atmosphere for the planet.[13] When he returned to the Pillar just in time for the next jump, he found his friend Shawn dead on the ground with Kadir holding a sword to Rebecca. He used his jet pack to knock Kadir over and stab him with the sword. Rebecca announced it was her that had sabotaged the Pillar as it made a final jump.[7]

Three years later, Grant lived on Godworld and frequently found he forgot who he was or where he was from. He was eventually attacked by a monster who claimed to be the monster who ate children who divulged secrets that his mother warned him about. His brother, Brian McKay, arrived and saved him from death.[2]

Soon, Grant found himself in the road with no memories once more. An officer took him to a local bar where he ran into Rebecca and Brian. Suddenly, Mr. Blokk entered the room and announced a puppet show. He had his puppets act out a scene that represented Grant's childhood and how his mother and father split. Grant soon realized how he was treating his family was similar. He pledges to his wife that he would put their family back together. Brian asked if Grant was ready to move on. Together, they walk through a bright light.[3]

Grant soon met with the Godhead. He had faced his fears and dumped his emotional baggage. The Godhead informed him he had taken his memories upon arriving to Godworld. He asked if Grant wanted them returned, and Grant turned him down. He said he would be his own man and his past just dragged him down. He jumped into his pillar ship and prepared to begin a journey to save his friends as it locked on its course to the closest dimensionaut beacon.[1]

He soon arrived on the Indian's Revenge Dimension once again. He found the dimensionaut beacon led him to Ward's corpse, rotting in a hole. He pressed a button on Ward's suit and heard a playback of his final words. Ward said it was Kadir's fault for ditching him and leaving him to die. Ward felt a sight of relief, knowing his friend's death wasn't actually his fault, but Kadir's. He was soon attacked by a Dralyn. Grant learned the Dralyn has followed the beacon as well and were destroying the world's where he had visited. He defeated the Dralyn and returned to his ship to suit up with weapons. He then returned and destroyed the Dralyn army and leader with the Pillar Ship's laser cannon. He set the coarse for the next dimensionaut and took off.[8]

Later, Grant II teleports with his wife, Sara II, to the cave where Pia and Nate are hiding from an onslaught of Dralyn. They attempt to abscond with them but Rebecca Dell accidentally knocks a stalagmite down from the cieling impaling Grant II. Sara II scowls at Rebecca and tells her it's, "always her!"[15]

By accident, Grant and his team brought back a virus that was wiping out the world population. The Centurions hunted down infected people and burned them to cleanse the virus from their bodies.[16]

Retrieved from "https://imagecomics.fandom.com/wiki/Grant_McKay_(Black_Science)?oldid=64263"
Community content is available under CC-BY-SA unless otherwise noted.