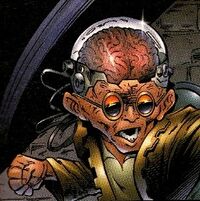 Dr. Gregory Brainard is a supervillain roboticist and geneticist who was a briefly recurring enemy of Morgan Stryker and his superhero mercenary team Strykeforce.

Dr. Brainard was introduced during Issue #12 of the first and only volume of Strykeforce series. He was hired by Randall Garr to destroy Strykeforce after Stryker humiliated and blackmailed Garr to pay him for a crooked job he set Stryker and his team on. Brainard then sent a holographic image of Dominique Beaner--Stryker's accountant, to Stryker showing her as Brainard's prisoner[1].

Stryker and his team went to rescue her but were neutralized by Brainard's own team known as the Industrial Accidents[2]. Brainard then took Stryker into custody, dismantling him as painfully as deliberately possible[3]. Brainard and his assistant Doris were then attacked by a party consisting of Sh'rrrnn--an alien, and one of Brainard's previous experimental operatives simply named Specimen Q. During the encounter, Sh'rrrnn neutralized Brainard after he threw an axe at her and returned fire, sending the axe straight into his brain dome[4]. Brainard and Doris soon recovered from the attack and Brainard ordered his Industrial Accidents to follow the intruders aboard their aircraft called "The Wingless Ding".

Retrieved from "https://imagecomics.fandom.com/wiki/Gregory_Brainard_(Top_Cow)?oldid=56609"
Community content is available under CC-BY-SA unless otherwise noted.