Guardians of the Globe 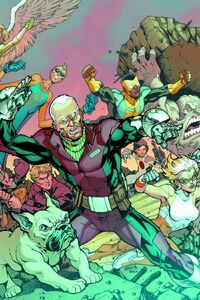 Base of Operations
Utah
Affiliations

The Guardians of the Globe are the world's premiere superhero team in the Image Comics title Invincible. The original team was based on DC Comics' Justice League of America. The team included Darkwing (based on Batman), War Woman (based on Wonder Woman), Red Rush (based on the Flash), Aquarus (based on Aquaman), Martian Man (based on the Martian Manhunter) and the Green Ghost (based on Green Lantern).

The Original Guardians of the Globe

The original Guardians of the Globe were a private organization funded by the superheroes War Woman and Darkwing. The other members of their ranks were Red Rush, Black Samson, Aquarus, Martian Man, Green Ghost, and The Immortal. The superhero Omni-Man, although never an official member of the team, was a trusted associate of the Guardians and knew the location and password of the Guardians of the Globe Headquarters in Utah. On one mission, Black Samson lost his powers, and was kicked off of the team. Later still, the Green Ghost was killed in action, and a new Green Ghost took his place.

Omni-Man betrayed and murdered the Guardians after calling them to their headquarters on an emergency. The only member of the Guardians to survive the massacre was Black Samson, who was not actively a member at that time due to the loss of his powers.

The New Guardians of the Globe

After the murder of the original team, the United States government decided to reestablish the Guardians of the Globe as a state funded agency. This new team was led by former Teen Team leader Robot under the direct supervision of Donald, the government's superhuman liaison and ultimately responsible to Cecil Stedman. Along with Robot, the initial lineup for the new team were Dupli-Kate and Rex Splode from the Teen Team, Monster Girl, Shrinking Ray and Black Samson, the only surviving member of the old team.

The new team's performance, in its first few months, did not live up to expectations of its superiors, leading Donald and Cecil to make some changes. Bulletproof was added to the team's roster and the newly resurrected Immortal was brought in a consultant to improve standards. After the team continued to under-perform, Robot was replaced as team leader by the Immortal.

Retrieved from "https://imagecomics.fandom.com/wiki/Guardians_of_the_Globe?oldid=67813"
Community content is available under CC-BY-SA unless otherwise noted.