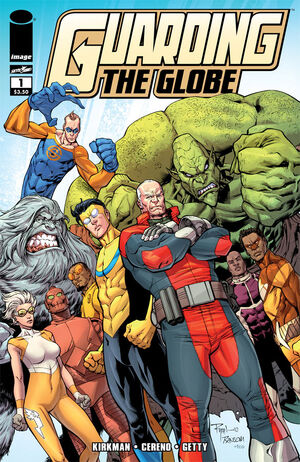 We need to bring as many superheroes as we can, from all across the globe, under our umbrella. Unify them into a cohesive network--a team, but more than that...an army! a Guardians of the Globe team with members stationed all across the planet--ready to leap into action at a moment's notice...it's time we strived for something more... it's time to truly begin to live up to our name, the Guardians of the Globe... it's time to truly begin...GUARDING THE GLOBE

Mark and the Guardians of the Globe fight the Flaxans before he leaves to fight in the Viltrumite War. Brit comments that with his Invulnerability, he can deflect their lasers, but says he can’t crack their armor without Superhuman Strength. Rex is baffled at the fact that they’re not rapidly aging. He destroys the tank and finds out that it’s what’s withholding the aging effect. Seeing that the Flaxans may return again. Robot decides to go in the Flaxan dimension, though Brit told them not to. Amanda goes behind him and the portal closes.

Cecil is told by Donald Ferguson about what Rex and Amanda did. Cecil states that a lost like this isn’t good since The Immortal and Kate are retired, Darkwing II and Rex Splode are died, and Mark took Zack and Oliver to space. He tells Donald that it’s time to truly start guarding the globe by assembling the team worldwide. Brit dons a new costume with jet gloves and boots to give him superhuman strength. He fights Tether Tyrant and Magmaniac, beating him. The duo are transported and Donald arrives, telling him that D.A. Sinclair invited his gloves and boots.

Donald reveals that he will be the new Guardians leader and will be meeting new team members. Donald offers him a ride back home, but Brit decides to go himself. He flies and falls on the ground, showing that he must get used to landing while flying. He goes inside and his wife, Jessica, is baffled at the costume he’s wearing, calling it “ridiculous.” She also mentions that it could bring the attention to supervillains. Brit argues that the house is a well-builted with escape pods, underground bunkers, etc. He leaves, stating that he liked his costume.

Meanwhile at Black Samson’s estate, Zandale Randolph, Carla, and Shapesmith go there for drinks. Samson greets them and calls Shapesmith “Robbie”. Samson wonders who she is and Shapesmith tells him that she is one of his painting models. Carla compliments the estate on it’s look. The four decide to watch sports and Shapesmith has opens a beer can. He tastes and doesn’t like it. At Stronghold Penitentiary, a possessed correction guard frees Mister Liu. A woman named Embrace leaves his body and introduces herself to him. She tells him that The Order wishes to see him.

Meanwhile at Immortal and Kate’s house, Cecil attempts to convince Immortal to come out of retirement. It is revealed that Kate is pregnant with Immortal’s child. Immortal appreciates him coming, but refuses to work. He goes on to say that throughout long-life span he’s has been a warrior, soldier, President, but not a reliable family man. He goes on to say that if he needs money to help put his future grandchildren through college, he’ll consider it.

Cecil takes Brit to Nepal to recruit a new member. Cecil argues that most of the Guardians are only American and thus they want to expand a worldwide roster. He also reveals that the recruit asked them to join. Brit jumps off and lands into the ice. Brit hears a yell and notices icelike beings fighting a person with white fur, with Cecil revealing him through the earpiece. Brit charges through them, with Yeti recognizing him. He cheerfully greets him and easily crushes them. Yeti tells Brit that he is a fan and his work and notices that he’s wearing a new costume. Brit reveals that he has been a superhero for over a century and tells Yeti to come since they have a plane to catch.

Meanwhile, Embrace takes Liu to what appears to be Greek ruins. Liu demands to know why he was brought there, stating that he has doesn’t know who Embrace is. Embrace comments that his imprisonment in America may be the reason. He becomes angry and reveals that he is one of the Order’s founding members, demanding respect from her. A voice tells him to “bow his head.” Liu recognizes him as Set and he grabs Liu’s face. Set threatens him and says that Liu will help him, stating that they will not stop the work that they have built for decades.

Retrieved from "https://imagecomics.fandom.com/wiki/Guarding_the_Globe_Vol_1_1?oldid=52816"
Community content is available under CC-BY-SA unless otherwise noted.