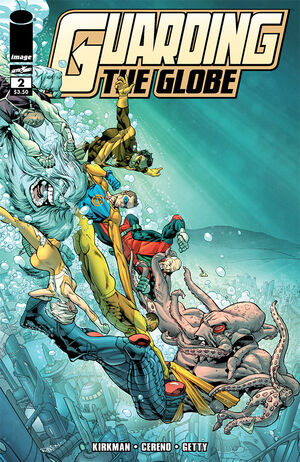 Octoboss, welcome...you do not belong in this world and it is they who restrict your action, limit your progress. I see in you great ambition. Ambition we can nuture and allow to thrive. You will be inducted into 'The Order. This world is not your own and the citizen fears you because of that. I believe you will make an excellent addition to our organization.

In Australia, a hero by the name of Kaboomerang is fighting a pack of dogs led by Dingo. He evades the dogs easily, showcasing his agility. He throws his boomerang and it explodes, showing causing his throwing skills and Telekinesis. The Guardians of the Globe arrive and he comes with them on their jet. Kaboomerang reveals that his reasons for joining because he’ll never be recognized in Austrailia. He asks where the women are and Brit assures that they’ll work on it.

In the Guardians’ Utah base, they arrive with Lethan being with them. Cecil introduces them to Brit, revealing him to be the Monarch of Atlantis. Black Samson reveals his knowledge on Atlantean culture and how they are based meritocracy, stating that they must kill a monster or the previous Aquarus in order for be made king. Lethan reveals that Mark had helped him with it. Cecil pulls Samson and Brit and asks that they take care of problem, stating that the underwater resources could be useful. He also reveals that he would prefer to have the king in his pocket.

The Guardians go to Atlantis and given Compact Mechancial Gills (C.M.G.) so that they can breathe underwater. Shapesmith, however, makes his own gills using Shapeshifting. Octoboss interrupts and breaks through, revealing that he is the one causing trouble. Shapesmith mentions Rex Sloan told him about Octoboss. Samson asks about Octoboss being there. Octoboss reveals that he was exiled from his home planet, Cephalon and how he took control of the Squidmen. He also reveals his plans to take the technology from there. Yeti punches Octoboss into a structure. A Squidman tries to kill Lethan, but Bulletproof blocks it with his Invulnerability. Kaboomerang throws his boomerangs underwater, showcasing that he can use his Telekinesis underwater. Shapesmith wraps himself around Octoboss, commenting that he had learn English better than him. Brit and Yeti do a simultaneous punch on Octoboss, defeating him. Kaboomerang throws a boomerang at him and the Squidmen surrender to them. Lethan bows to them, revealing that they are now the new Kings of Atlantis for their strength and courage, much to their dismay.

Meanwhile in Mexico, El Chupacabra is drinking, depressed over losing his wife. His ex-wife calls him, worried about him. He ignores the call and gets trouble from people there, believing he’s impersonating him. Cecil teleports there, who reveals his name to be Francisco, asking for his help. Octoboss would break out and Lethan would smack him away. He declares himself “destroyer of Octoboss” and the crowd cheers him on.

Brit transports him who is revealed to Shapesmith impersonating him so that the six wouldn’t have to rule Atlantis. Brit reports to Cecil and Cecil tells them to come to base as he has two new recruits for them. The real Octoboss is rescued by Multi-Paul who Octoboss mistakes for an enemy. Paul had killed his captors. He drops Octoboss off at an Order base and Set also gathers Embrace, Mister Liu, his bodyguard, Face, Titan, Isotope, and Machine Head. Set offers him a position in the Order, stating that his ambition will help them thrive.

Retrieved from "https://imagecomics.fandom.com/wiki/Guarding_the_Globe_Vol_1_2?oldid=68278"
Community content is available under CC-BY-SA unless otherwise noted.