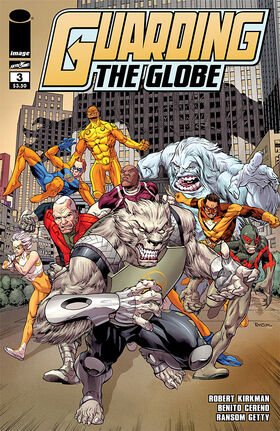 I've heard it said, everyone is the hero of their own story. The thought is that even the most vile villain believes his actions to be right and thinks of himself as "good." I am here to tell you, right, that I am evil. I am greedy, selfish, I do not care or the plights of others. The citizen walks among us but he is not one of us. He goes on about his daily life unaware of the dangers that surround him. The dangers people like us bring to his doorstep. We are better than the citizen. We are aware of the evils of the world and we celebrate them...profit from them. Money and power. That is our desire. That is the foundation of The Order...I look before me, and I see a power the world has not yet experienced. A power that could bring about the end of all things.

At an independent art show in Los Angeles, Zandale invites the Guardians of the Globe to his display of photographs. Zandale greets Brit, Jessica, and Outrun, the new member from South Africa. He is also with his girlfriend, Carla. Donald tells Brit that the venue would be a good place to meet, but Donald reveals that they were aware of the photography he does.

Outrun goes to Utah to check on the Guardians of the Globe base. She notices a depressed Yeti, believing that he doesn’t go out because of his appearance. She tells him to cheer up and leaves. Yeti realizes that he misses his family.

Meanwhile in the secret underwater of The Order, Mister Liu attacks Titan with his soul projection dragon. He outmaneuvers the dragon and attempts to attack him and his bodyguard. Set attacks him, easily breaking all of his rock armor. Set threatens them if they don’t stop. Liu argues that he had dealt him shame, stating that he failed to get Multi-Paul released. Set threatens him and argues that even though Machine Head had lost his territory to Titan, he isn’t fighting.

Meanwhile in the London Clocktower, Brit and Cecil meet to develop creating a base in there. He also reveals he will negotiate to build bases worldwide and how he plans to build a moon base. Brit also reveals that his son will inherit his Invulnerability powers. Cecil gets a call to let Brit know he’s needed.

In Upstate New York, Wolf-Man is fighting Gorgg with his Wolf C.O.R.P.S.. Gorgg has defeated his werewolf companions and Outrun, Yeti, Samson, Kaboomerang, and El Chupacabra. Wolf Man reveals that Gorgg was defeated by him a while back and that he had been split into many pieces since Face had move the stones. They started fighting the mini Gorggs and Brit arrives. Kaboomerang throws a boomerang at him, and Outrun notices his Telekinesis powers are what make the boomerangs precise. Outrun evacuates two member of Wolf C.O.R.P.S. to Iowa while Yeti easily pummels the mini Gorggs. The Gorggs rebuild into the giant Gorgg. Gorgg attempts to eat Samson, Kaboomerang throws a boomerang at him and Gorgg lets Samson go.

When Outrun comes back from Iowa, Wolf-Man reveals that they had to move some of the Stonehenge pieces and she rushes to Salisbury, England. She runs on water, showcasing her Superhuman Speed. She tells Cecil to go to the Stonehenge site and has Zandale Randolph and Yeti over there to carry the pieces. Zandale is having a hangover from the art gallery. Outrun reveals what Wolf-Man told him and the duo place the monument pieces on Gorgg’s head, causing him imprisonment. The team is relieved, but Cecil is frustrated at how he will explain it to the Prime Minister of England.

Meanwhile in The Order’s underwater base, Set is a giving a speech about how he is evil and doesn’t have a story about him believing he’s a hero. He goes on to say that he doesn’t care about people and he sees a power that can bring about the end of all things.

He looks around at Liu, head of the Asian territories with his bodyguard and Paul Cha, Titan in charge of New York, Embrace in charge of the Middle East from her Israeli stronghold, Walking Dread in control of Eastern Europe from Poland, Machine Head in charge of Los Angeles after negotiation with Titan. Also there are the Face in control of Canada, Insomniac in control of Egypt and Northern Africa, Red Eye from Brazil in charge of South America, War Woman II over in Amazonia over near the Mediterranean, Slaying Mantis from Ireland, and Octoboss taking charge in Earth’s oceans. He tells the group it’s time to take lives.

The Guardians help some polar bears by stopping Global Warming from melting their iceberg.

See The Astounding Wolf-Man #25 for the beginning of the Wolfcorps fight against the Gorgg monsters.