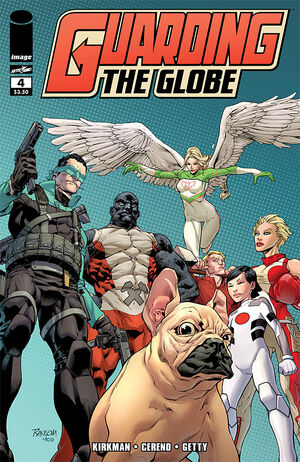 That's no coincidence. All these guys killing innocents, kicking our butts and running off, still at large? that's something else. The bad guys are going global, just like us. The difference is they're not doing televised pressed conferences telling the world what they're doing. That means they have us at a disadvantage. So when you get split up into teams, spread out over these fancy new bases, it means you watch your ass, and you watch your neighbor's ass. Because things, I believe, were just raised to the next level.

Black Samson gives a speech to the public about how the Guardians of the Globe are expanding their reach. He introduces the new team members starting with Cast Iron from Yugoslavia, Kaboomerang from Australia, Outrun from South Africa, El Chupacabra from Mexico, Yeti from Nepal, Le Brusier from France, Pegasus from Russia, Japandroid from Japan, and two former Capes, Inc members, Kid Thor from Canada and Knockout from the US. Brit congratulates for the speech, much to his disgust. Brit argues that since he’s a founding member of the organization, he is the public face.

Meanwhile in China, a hero by the name of Best Tiger has taken down several ninjas at is down to his last bullet. Their leader tells him that he has one left and he has no way to win. Best Tiger rebuffs, stating that one is enough. He fires and the bullet ricochets, taking out several ninjas and their leader at once. This showcases his incredible marksmanship and heightened senses as he was blindfolded when he performed this feat.

Meanwhile in the underwater base of The Order, Embrace reports to Set that the Guardians have made their announcement and Set asks that the Order make its announcement as well. In Chicago, Illinois, Titan and Kursk battle Black Samson and Le Brusier. In London, England, Knockout, Kid Thor, and Cast Iron fight the Walking Dread. In Madrid, Spain, Zandale and Outrun fight Slaying Mantis.

In Sydney, Australia, Octoboss is fighting Yeti and Pegasus. In Cairo, Egypt, Insomniac fights Kaboomerang. Insomniac reveals that he knows about his Telekinesis powers and how he makes to boomerangs explode with it to surprise enemies. In Rio de Janeiro, Brazil, Japandroid, Best Tiger, and Shapesmith fight Red Eye, who’s eye beams follows to his target.

Brit arrives to Donald and an exhausted Ms. Popper who has teleported most of the team. Brit notice Chupacabra is not with Kaboomerang and he has an exhausted Popper teleport him there. Brit sees that Chupacabra is drinking again. He mentions that he was thinking about his wife. Brit calls him pathetic, much to Chupacabra’s sorrow.

Brit goes to Cecil under the Pentagon to demand that he be booted off the team. Cecil argues that he owes Chupacabra. Brit walks out in anger. All the Guardians meet into the Utah base with Brit telling them that they will be cycling around the Guardian bases as the The Order can attack at any moment.

Kid Thor goes to the moon base that they had built and talks to his fiancée, Knockout. Japandroid and Cast Iron would be playing chess, showcasing their hobbies. The duo contemplate missing one another. Knockout would cycle through London and Tokyo. Knockout would talk about how the team would be getting along as well as them disagreeing. Chupacabra is seen drinking in Utah. Outrun would make flirtatious remarks towards Zandale, though he says that he’s taken, in London. She comments that Brit said to “watch your neighbor’s ass.”

Samson would arm wrestle with Yeti, though Yeti is purposely holding back. Samson tells him to “play for reals” and he easily defeats Samson, showcasing that Yeti is stronger than Black Samson. In Egypt, Shapesmith would see Best Tiger create more weapons. Pegasus would feed Le brusier dog food. They would get a call for them to spring into action.

War Woman II comes before them having killed several police officers. She revealed she had researched to find Amazonia. She reveals that she had taken over using strategy and had come back to Earth. She also reveals that the woman she loved left Amazonia to protect Earth, revealing that she is previous War Woman’s lesbian partner.

She goes on to say she will take revenge on the world of men for what they did to the previous War Woman. Brit assigns for Japandroid to rescue citizens while other fights. Knockout notices that Chupacabra isn’t feeling well and cries for him. Brit is attacked by War Woman and Japandroid shoots at her with coin rifles she made with parking meter, showcasing her advanced Technopathy. Kid Thor attacks War Woman’s stone man with his hammer while Cast Iron recovers.

Knockout holds them off with a hungover Chupacabra recovers. Chupacabra attacks a stone man, but only gets attacked himself. War Woman sees that Chupacabra has wronged a woman, detailing the smell of alchohol on him to soothe the pain. She goes on to say that she sentences him to death. He cries and begs her to kill him. She readies the axe and attempts to kill him. Cast Iron attempts to rescue him, but Chupacabra tries to push him away. Cast Iron is hit by the axe, showing that it can pierce his steel skin. War Woman leaves, declaring victory for Amazonia. Ms. Popper teleports a medical team to check on Cast Iron. Chupacabra attempts to explain, but Brit refuses to listen. Brit calls him a “worthless drunk” and tells him that Cast Iron better survive, blaming the attack on him. A depressed Chupacabra wallows in grief. Under the Pentagon, Cecil goes on to say that their worst fears are confirmed. The Order is real and he claims that the Guardians can’t even stop them.

Retrieved from "https://imagecomics.fandom.com/wiki/Guarding_the_Globe_Vol_1_4?oldid=51664"
Community content is available under CC-BY-SA unless otherwise noted.