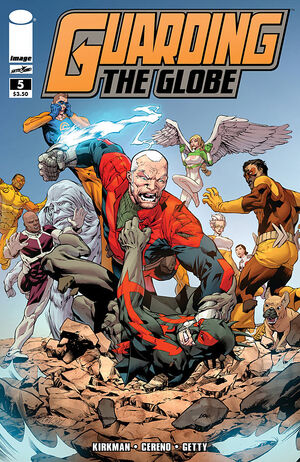 Ten minutes. This what The Order is capable of when we work together. If the citizen did not fear us before, he is surely pissing himself now.

The team visit a severly injured Cast Iron. The team were unable to reach his family. Francisco goes to visit and apologizes, but Brit becomes angry. Zandale tells him to leave, as he hold an angry Brit back.

The first day, Kaboomerang, Le Brusier, and Shapesmith fight Vault. The second day, Japandroid, Yeti, and Kid Thor would fight Doc Seismic. The third day, Cast Iron would finally succumb to his injuries and die much to Pegasus, Donald, and Zandale’s sorrow. The Guardians would attend his funeral with a depressed atmosphere.

Francisco attempts to apologize again, but Brit becomes angry and attacks him, though Cecil tried to hold him back. Francisco pulls out his retractable finger claws and strikes Brit, though it has no effect. Francisco asks him to leave him be, stating that he feels guilt for his death. Brit suffocates him, but stops before he kills him. He tells him that he is off the team and blames Cecil for his death too. He leaves in anger. In the underwater ocean base of The Order, Set gives the word to strike in five days. At a bar, Outrun goes to visit a drunk and depressed Francisco. She comforts him and Francisco apologizes as after he cheated on his wife he has been the same. She tells him not to worry. She grabs him and flirtatiously licks his face. She states that she will help him “forget about her too,” much to his shock.

Meanwhile, Donald tells the Guardians to look out for any supervillains as they may be related to The Order. The Guardians rush to fight Killcannon. Knockout easily defeats him, much to the Guardian’s annoyance. After a super speed and Telekinesis tennis battle, Outrun wins over Kaboomerang. He whips away his sweat and prepares to shower. Outrun seductively suggest that they shower together and “work up a different kind of sweat,” much to Kaboomerang’s happiness.

Magnattack would use his Magnetokinesis to steal gold and goes through his secret hideout. He uses his voice recognition to gain access, shocked to see that’s Best Tiger holding up him. This showcases his voice mimicry or hacking and stealth skills.

Meanwhile on the Moon, Knockout and Kid Thor would complain about the living arrangements. Japandroid upgrades the TV from old function to holographic, revealing her function to upgrade existing technology.

Cecil tells Brit that’s there’s a large object that coming towards him. The Guardians arrive and see a Frost Giant looking for something. Brit reveals that he had fought one, but he needs fighter jets and a nuclear reactor to beat one.

He punches the Frost Giant, though the attack has no effect on him. The Frost Giant reveals that he was looking for his son and he had followed his scent from Nepal, showcasing his extremely heightened senses. He points to Yeti who was hiding from his father, the Frost Giant. Brit flies down and with enough persistence, Yeti reveals that he is only 12 years old. Brit become angry as he is only a child and on the team. Yeti argues that he’s super tough and Brit apologizes, but says he’s off the team, much to Yeti’s sadness.

Zandale starts looking in a refrigerator and sees Outrun go towards him, much to his shock. An exhausted Zandale sits down and tells Outrun about his heptic schedule of fighting villians and helping Atom Eve. Outrun massages his shoulders, much to his relief. She bites her lip seductively and Zandale notices what she’s attempting. He tells her that he has a girlfriend. She goes on to say that she won’t tell if he doesn’t. Zandale smiles, meaning that he had slept with her.

Pegasus flies with Le Brusier, wondering how Yeti was kicked off the team. They see a robbery and she throws Le Brusier into the building. They defeat the burglars and leave after seeing they aren’t related to The Order. Outrun notices that Shapesmith is playing video games. She talks about how she heard he likes looking “human lady parts” and if he would like to “see some?” He complies and the duo head into a door. She asks about his Shapeshifting and he asks what does he “have to do with anything.”

Meanwhile, Cecil hears about what happened in Paris. The Order had killed many people, destroyed property, historical sites such as the Eiffel Tower in a record time of 10 minutes. Cecil sees what happened and tells Donald to send all the Guardians.

Retrieved from "https://imagecomics.fandom.com/wiki/Guarding_the_Globe_Vol_1_5?oldid=51665"
Community content is available under CC-BY-SA unless otherwise noted.