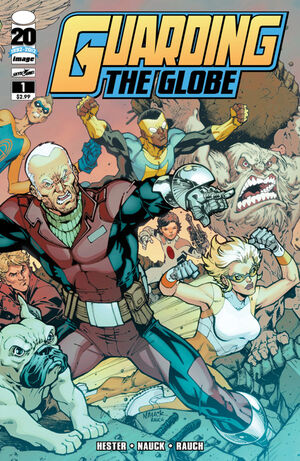 Your father displeased me. Don't make the same mistake.

In Charlotte, North Carolina, the Guardians of the Globe start fighting the Magmanites. A magmanite bites off Brit’s jet glove off, much to Japandroid interest. She asks that Black Samson to kick a car to the center. She realizes that the Magmanites are eating the metal and asks that Kid Thor hit the water to cool them down. Brit asks Knockout to handle everything else and he calls Ms. Popper for her to teleporter him. She was showering and brushing her teeth. She teleports as it makes the “POP” sound.

He arrives to his house in Fairfax County, Virginia to a happy Brit Jr. and his wife Jessica as well as a doctor. Brit apologizes to Jessica for going on a mission. He greets his son looking at their fish. Brit sits down and the doctor reveals that his son is showing symptoms of Autism. Brit asks about it more and the doctor reveals that he may have social awkwardness and he may process information differently. He asks that they don’t blame themselves for it, much to Jessica’s sorrow. The doctor gives him an Autism awareness pamphlet and says that the age of the parents may play a role, citing Brit being years Jessica’s senior. He goes on to say it’s too early to worry and that new therapies are being invented.

Meanwhile in Hong Kong, Best Tiger and Kaboomerang bond together around town. Kaboomerang reveals that he had known little about his origin and he thought he was originally blind and how Knockout that thought his Martial Arts] skills were so great that he’s convinced others he isn’t blind, similar to Daredevil. Best Tiger walks up to a door and says a secret password in Mandarin. They enter the shady club and Kaboomerang notices the women around. He keeps looking, not realizing that Best Tiger is untying his tie and using it as a blindfold. He looks over and Best Tiger starts shooting, much to Kaboomerang’s surprise that he was brought on a mission. He pulls out his boomerang and starts helping him.

Back in Virginia, Brit plays catch with Donald as Donald says is “better than therapy.” Brit comments that he has uses his baseball glove since he got it from Jackie Robinson, showing his old age, but him still being in his physical prime. Donald talks about how he’s not himself since his death, citing that he doesn’t need to do human functions anymore. He goes to talk about how his wife and son know about it. Brit assures him that since he recognizes the problem, he can get through it. Brit talks about how he’ll be late for work and Donald flies him out. He tells Brit to leave his glove as it can be more use to others.

Rex reports about how recently Japandroid was able to find out about Magmanite culture and how Iron ore is part of their diet, citing that they were low on it. In her report, she proposed that scrap metal be delivered to help in their peace isolation. He reports in on Best Tiger’s situation in Hong Kong in which they were enslaving people in exchange for heroin and cybernetic weaponry.

Donald reveals that Best Tiger had found this lead on his own. Rex remarks that he and Japandroid have compared him to a supercomputer in combat situations, citing his Genius Level Intellect. Rex reports El Chupacabra fighting a biker gang in Durango, Mexico, much to Brit’s anger. He demands that Cecil explain and he reveals that he had quit drinking and found Christianity. Donald argues that he’s a valuable asset and Brit leaves, stating that Cast Iron was too.

In Failaka Island, Kuwait, a man runs into a palace with dozens of pregnant women, likely enslaved since they have collars. He asks where the master is and he is working on a bomb. He tells the man that he knows about the Triad failing. He tells him to leave as he will likely wake up the children who are tinted with pale blue skin.

Brit goes home and eats dinner with his son and wife. He notices something wrong with Jessica and she begins to talk about how she noticed early symptoms of his Autism. She begs to cry as Brit Jr. doesn’t notice the emotion and continues playing with his food in happiness. Brit tells her that he doesn’t care if he’s like this, stating that he deserves their love. He comforts her as she says that all she wants it for him to feel their love. In North Korea’s capital city, Pyongyang, The supreme leader has died and everyone is attending his funeral. They asks that his son, the new Supreme Leader, take him into the forbidden temple and he does so. A voice calls out to him, offering protection. He pulls out his sword and strikes him, though the sword breaks and has no effect. The voice is revealed to be Set, asking that he doesn’t repeat the same mistake his father did: disappointing him.

Retrieved from "https://imagecomics.fandom.com/wiki/Guarding_the_Globe_Vol_2_1?oldid=51667"
Community content is available under CC-BY-SA unless otherwise noted.