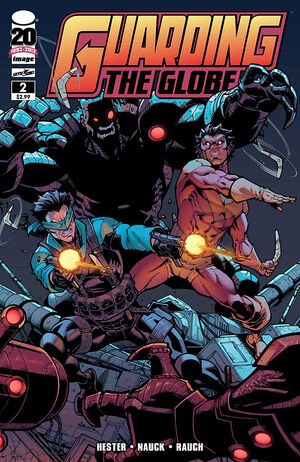 That's the point. He isn't transmitting his genetic heritage via sexual reproduction, at least not directly. He's created a virus that rewrites the genetic code of the infected, reordering the sequence of nucleotides in the chromosomes of the host to mirror Mauler's. When this thing goes off it will alter the reproductive systems of every male for a twenty kilometer radius, and they won't even feel a thing.

In Khulna, Bangladesh, Brit rescues two children from a muddy environment while Shapesmith and Robot attempt to pull them up. He had one to Robot’s drone while the boy had not made it. Yeti and Amanda hold up the collapsing bridge to help any survivors. Brit becomes angry with the woman leaving her child, much to Kid Thor and Robot’s dismay. Yeti reveals Amanda to he cannot swim. Pegasus reports to Ms. Popper that there is a group trapped in a flour mill. SHapesmith pulls the passengers off the bridge in time.

Zandale saves Yeti and passengers in a car, showcasing his Superhuman Strength. Brit reveals to the comm piece that Best Tiger and Kaboomerang will have to wait on them on their human trafficking raid. Best Tiger reveals that he likes solo ventures. He speaks in Mandarin to the sailor and tells him to set sail for them. The sailor rebuffs, stating that he will be back in business the next week. Best Tiger whispers “right hand” to him and fires his gun walking away. The duo walk away and Best Tiger fires his gun at him, showcasing his excellent Marksmanship. They arrive and

Best Tiger tells them to stay calm in Mandarin, revealing that the women were likely transported from Hong Kong or China. Kaboomerang looks in confusion at the blue children and Mauler reveals himself to be the father of them. He throws a boomerang and it goes right through Mauler, showing that it is only a hologram. Another cloned Mauler appears before them with disfigurements. Kaboomerang calls other members, confused as he was killed before.

Meanwhile in in a church at Chihuahua, Mexico, Francisco opens a beer can and pours it out, showing his change to sobriety. Franscisco goes out as he is called. A couple asks for his help as their daughter, Marisol, was killed and they found her dismembered leg.

In the central Guardians of the Globe base in Utah, Knockout and Outrun with Knockout bored. Outrun attempts to seduce her, much to Knockout’s shock. She refuses and Ms. Poppers teleports them to the battle between Guardians and the Maulers. Japandroid notices that the behavior for the Mauler clones is unusual. Ms. Popper and Japandroid go to a lab while Knockout and Black Samson fight. Japandroid discovers that Mauler had built a gene bomb that rewrites the genetic code of pregnant women that mirrors his own, essentially making it a “rape bomb” as Ms. Popper calls it. Ms. Popper teleports to find it while Japandroid attempts to discover a location.

Meanwhile, Set has a submarine transported to Atlantis while the crew members begin to die from the underwater pressure.

Back in Kuwait, A mauler clone attempts to crush Samson, but Kaboomerang kills him with an explosive boomerang. The pregnant women attempt to escape, but are shocked by the invisible barrier, killing them and the fetuses. Mauler reveals that there’s a bomb in Kuwait, but says that he activated four months ago. He goes to escape and launches an escape pod. Kaboomerang notices him and uses his Telekinesis to explode the boomerang to kill him. Outrun rushes to the area and she discovers that there’s no body. The Guardians go back to the lab with the blue children and she asks the Kuwaiti government form a quarantine zone to keep track of all the victims. A baby defecated and Samson asks if anyone knows “how to change a diaper.”

Francisco begins his investigation while talking to Cecil on the comm. He finds old bones and Wolf-Man attempts to attack him.

Retrieved from "https://imagecomics.fandom.com/wiki/Guarding_the_Globe_Vol_2_2?oldid=51668"
Community content is available under CC-BY-SA unless otherwise noted.