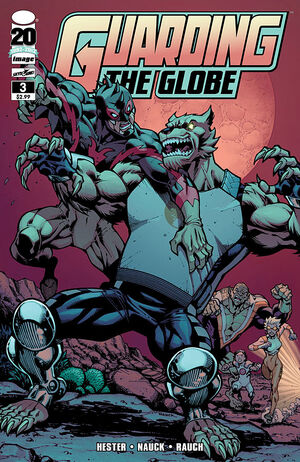 Take a look at that line, Knockout. Folks don't wait in line like that for something unless it's important, free or not. What we do here--This place--- it's important to the neigborhood

In Samson's old neighborhood of Baltimore, Samson is giving free haircuts as he shaves an older gentleman. A confused Kid Thor and Knockout asks why they are there. Black Samson tells the duo that he owes his old neighborhood and goes on to say that it’s relaxing. The Elephant goes through the shop and Black Samson slams him. A confused Elephant wonders why they are there. Kid Thor hits him with his hammer. Elephant talks about how he can’t go straight with his record and find a job. Samson asks he had a job, would he work. Elephant says so and Samson offers him a job at the barber shop, much to Kid Thor’s and Knockout’s confusion. Kid Thor asks what is he doing and he replies “fighting crime.”

In Mexico, Francisco and Wolf-Man begin battle he knocks his earpiece off, much to Cecil’s horror. The duo start fighting until another werewolf roars.

In Paris, Le Brusier is chanted by a crowd as they put the St. Joan statue in the center of the Royal Palace. Pegasus looks in happiness. Brit reveals to Cecil that Zandale is helping put the Eiffel Tower back together. Cecil asks Brit for team members to help with El Chupacabra. Jessica brings Brit Jr. as he crying from the overwhelming cheering. Brit is confused as the doctor said before that the visual stimulation would help with his Autism. Le Brusier pulls too much and the statue drops, much to Brit’s annoyance and Brit Jr.’s happiness.

Gary apologizes as he mistaken Francisco for an enemy. The duo charge toward the werewolf and Gary reveals that he is the King of the Werewolfs and that the werewolf is one of his kind. Gary threatens to kill him and he pins him down. A parasite comes out of his mouth and goes into Gary’s. Gary attempts to resist, but is unable to.

In Atlantis, Set begins wrecking havoc upon the city as Lethan was exploring. The duo notices he has one of their artifacts, the crest of phylasis. A royal guards fires a beam and it is absorbed and reflected back at them. The royal guards are shocked and Set leaves.

Back in Mexico, Francisco attempts to run from a possessed Wolf-Man. Cecil sends Amanda, Outrun, and Japandroid to take care of the job. He asks Outrun to distract him while the werewolf explains. He reveals that an extraterrestrial parasite has infected them and plans to breed with them, much like Gary is infected with now. Outrun knocks him out and the parasites attempts to control her. She slaps it away and it goes inside Japandroid. Amanda and Outrun becomes cocky as she says that Japandroid isn’t organic.

The parasite reveals that they have adapted to synthetic life and has taken over Japandroid's body, much to the Guardians’ horror.

Retrieved from "https://imagecomics.fandom.com/wiki/Guarding_the_Globe_Vol_2_3?oldid=51669"
Community content is available under CC-BY-SA unless otherwise noted.