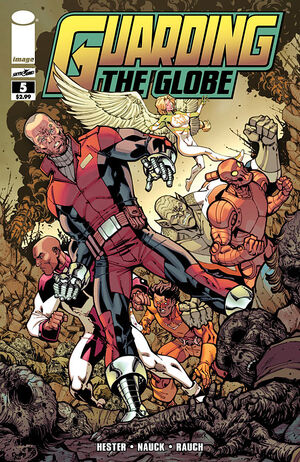 There's Monster Girl. Her real name's Amanda. She's a smart, successful woman trapped in the body of a monster, only when she turns back to Human, she finds that body growing progressively younger, more child-like. It's slowed down now, but she'll never be the woman she was. Never. And this guy Yeti. Believe it or not, there's a world where he's the runt of the litter, but he still fits in there. Yet he's here, helping a world that sees him as a little more than a monster. And Shapesmith. God knows what he really is, but his mind as alien as his body. Here he is, making the best of it. Le Brusier. He's a freaking dog, but he gives his all on this team, this world. This is what I see every day, Jess. People who aren't normal, people far less normal than our boy. But people who are still accomplishing greating things. I'll tell you the truth, hon. Maybe Brit's Austism doesn't bother me.

Outrun meets with the four men she had sex with under Embrace’s possession: Zandale, El Chupacabara, Shapesmith, and Kaboomerang. She calls them “pigs” and says that she remembers every detail that Embrace made her do. Zandale attempts to speak, but Outrun shuts him down. She asks in anger what made them think that she would turn into what she calls “a chain-smoking skank.” Zandale apologizes and argues that he is accustomed to women knowing what they want from him. Outrun becomes angry with him and he becomes angry as well, telling her to blame Embrace and not them.

Francisco attempts to calm him, but he talks about how “no means no” and sarcastically asks “is he supposed to bring an exorcist to every date.” Francisco explains that Zandale doesn’t have much experience in repercussions of his actions, comparing to what he did to his wife. Outrun becomes angry and demand that he doesn’t compare it to him. She apologizes and he accepts, stating that he can’t ask forgiveness if he isn’t willing to give it. A confused Shapesmith asks what was wrong, confused on Human culture. He states that she said he was good, “over and over.”

Meanwhile, Rex, Brit, Amanda, and Cecil watch the session. Cecil argues that it was her idea and Amanda says that she will need much counseling. Rex discuss how their plans may be compromised and mentions that Embace may be able to control multiple victims, citing that she controlled Knockout before. He also believes that she may let her remain uncontrolled and control here and there. Rex reveals that he reseted the security measures and Amanda sees that watching the therapy session.

Francisco takes a confused Shapesmith, not knowing what’s going on. Outrun tells Kaboomerang that he can leave, but he explains. He talks about how he’ll never hurt her and that he thought what they did was special, much to her frustration. He explains that he had cared about her before and admired her. He goes on to say he was a virgin until a possessed Outrun slept with him, much to her shock. He goes on to say that he hadn’t found the right person and regrets that things turned out the way they were. He leaves, stating that he couldn’t live without her knowing.

Brit rushes to his home in Alexandria, Virginia, believing his son is in danger. Jessica tells him that Brit Jr. is at one of his former dancers at his club, much to his confusion. She reveals that that woman had changed her life around from being an ex-crack addict to being married. She goes on to say ask about why he doesn’t care too much about his son’s Autism. Brit pulls her along and shows her why. He talks about how Amanda, Yeti, Shapesmith, and Le Brusier are different from others while they fights Walking Dread. Black Samson manages to knock out Walking Dread. He mentions about how they are different and making a difference, much like Brit Jr will one day. Jessica apologizes and Brit promises her a day to herself. She asks that they go bowling, much to his annoyance.

Meanwhile in Mumbai, India, The antlered alien who is revealed to be Thoth, holds Embrace’s ghostly remains. It is revealed that Set is Thoth’s brother. Thoth mocks him for inhibiting his powers and Thoth uses his Life Force Absorption power on him. However, Set reveals that he is immune to Thoth’s powers as Thoth is immune to Set’s powers of Control powers. Set argues that he studies the planets he conquers and Thoth uses his powers to absorb the life force of several Indian citizens.

In Failaka Island, Kuwait, Zandale, Knockout, and Donald observe the Mauler children who were produced by his gene bomb [1]. Donald argues that it’s the least that they can do in helping the traumatized victims. Mauler returns with his lawyer. An angry Zandale holds the papers that are given by his lawyer citing invasion of property. He punches Mauler through the paper. He begins pummeling him, much to Donald’s shock. Zandale argues that they have lawyers too and that they’ll charge him with something.

In Virginia, Brit bowls with Jessica and his former dancer along with her husband. She asks where Brit Jr is and she reveals that she is in good hands.

Yeti pushes Brit on the swing, much to his happiness. He pushes too hard and Pegasus catches her. Brit Jr. asks to go again.

Brit gets a call to go to India. He apologizes to Jessica for leaving, much to her frustration. The Guardians arrive and see Thoth and Set battling each other.

Retrieved from "https://imagecomics.fandom.com/wiki/Guarding_the_Globe_Vol_2_5?oldid=51671"
Community content is available under CC-BY-SA unless otherwise noted.