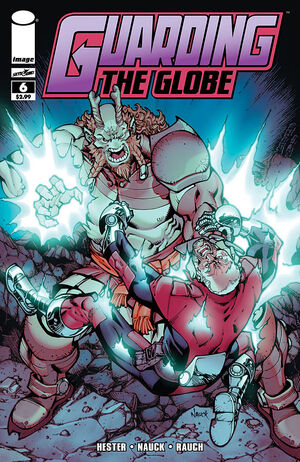 Guarding the Globe Vol 2 6 In Mumbai, India, Set declares his victory against his brother.

However before he did, Thoth and Set were battling while the Guardians of the Globe witnessed it. Pegasus confirms that Set, but doesn’t know who the other person is. Black Samson gets ready to charge, but Brit advises him otherwise. He argues that Set could knock them unconscious or Thoth could absorb their life force. Rex’s drones recommend that they rescue the citizens there. The team splits and Ms. Popper teleports citizens out of a bus. Since she’s exhausted from it all, Brit has Rex’s drone and Kid Thor hold a collapsed building while Shapesmith extends his arm as a rappel line. He finds a woman named Samar trapped under there. She asks that Brit rescue her little sister.

Thoth launches Set and Shapesmith lets Brit go. An angry Kid Thor goes to attack, but Thoth catches his hammer strike. Thoth grabs him and drains his life force. Pegasus grabs Le Brusier after Le Brusier tries to charge into Thoth. A horrified Outrun escapes after Rex’s drone has holds off Thoth. Yeti evacuates citizens and looks confused as Robot is attacking Thoth, stating that Brit told them not to fight him. He fires a missile, though the latter has no effect on Thoth. Thoth easily destroys his drone and he sends more drones.

The drones fire more missiles and the building Brit is in starts collapsing. The woman starts crying as her sisters may have died. A confused Samar asks why Brit hasn’t thrown the building and Brit reveals to her that his Invulnerability doesn’t give him Superhuman Strength. She offers to help and the building begins collapsing more. It finally collapses, killing Samar and likely other people in the process. Set pulls Brit out of the debris, confused on why Brit has bleed. Brit angrily corrects him and strikes him, though the latter has no effect. Set asks for his help, much to Brit’s shock and anger. Set reveals that him and Thoth battle for planets as it is their way of life.

He also reveals that Thoth’s power grows stronger as he drains more life. He asks Brit to use his invulnerability to allow him to doubt his powers. A confused Brit asks why he doesn’t Mind Control on him. Set remarks that he operates against a strict code and refuses to use it. Brit remarks that it’s all a “god-damned” game to him. Set goes on to say that humanity cannot survive Set and Thoth’s game. He asks if what happened previously was all a way to help him and Set replies “in a way.” Brit in anger tells to “just ask.” Thoth easily destroys Rex’s drone and Brit goes to attack. He grabs him and attempts to drain his soul. Brit, however, is unaffected. Thoth begins to doubt his powers and Set uses the chance to throw a freight train. Amanda and the rest of the Guardians arrive to the scene, asking if Brit is okay. Brit says no as he says “the first time in a century.” Kaboomerang comments that Brit is looking older and Outrun asks where he is. Brit goes on to say that after Set drop the train on Thoth, they left. The Guardians would go to Utah and have Kid Thor’s dead body transported there. Knockout would go to see his corpse and goes to him, crying. She grabs his hammer and places it back with him. A glow happens to him, much to her surprise.

Brit gets to his house in Virginia and picks up Brit Jr.. Jessica wakes up and she talks about how her life change since he met her. An exhausted Brit, however, fell asleep.

Retrieved from "https://imagecomics.fandom.com/wiki/Guarding_the_Globe_Vol_2_6?oldid=51672"
Community content is available under CC-BY-SA unless otherwise noted.