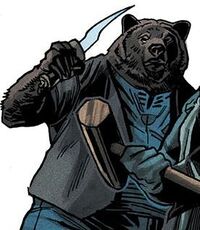 Gutruk was one of the surviors from the Fall of Keneil. When the bison tribes launched a full frontal assault on the ruins of Keneil, he was one of the few to stand alongside the Great Champion and fight. During the fight Gutruk was injured in the shoulder by a bison. Learoyd ordered Bhord and Arkan to get him out and across the bridge with the other Keneil inhabitants.[1]

Retrieved from "https://imagecomics.fandom.com/wiki/Gutruk_(The_Autumnlands)?oldid=57459"
Community content is available under CC-BY-SA unless otherwise noted.