Hurlbert Percival "Percy" Wainright III also known as Black Anvil, is a third-generation member of the highly-aristocratic Wainright clan. He is most known as being a member of Morgan Stryker's Strykeforce mercenary team of superhumans.

As Black Anvil, he is shorter than the average human or superhuman, suggesting possibly standing just under 5 feet in height. He is massively-muscled and bears the obvious distinction of appearing "blue-skinned". His earlier costume or outfit bore gold-yellow armbands, leggings and boots before later just simply wearing brown combat boots, brown gloves, and brown pants held up with brown suspenders. 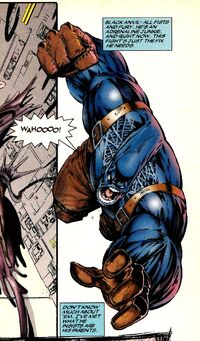 As Percival Wainright, he began as a well-groomed socialite. It is mentioned that his family lives in the Hamptons and that he was educated at Axton Preparatory School. However, when he is away from home, Percival is a slang-talking, adrenaline-fueled adventuring mercenary. This would emerge during the second of two featured home visits during the Strykeforce Volume 1 series, when Anvil opened with "Yo Mama! Yo Poppa!" and was promptly criticized by his father for his diction sounding more as though he spent time in a pool hall instead of a high class prep school.

Away from home, and on missions, Anvil is a heavy brawler. He has a short-fuse temper that takes little effort to set off as demonstrated early on with teammate Bloodbow[1][2] (although later they became good friends) and Stormwatch team member Cannon[3].He leaves strategic planning in the capable hands of the team's leader Morgan Stryker. However, in spite of his lack of strategy and pension for fist fights and taking extreme risks because of his invulnerability, Anvil is extremely loyal to his teammates.

Anvil is also very loyal to his family. Although Stryker suggests that Anvil likely is adopted, Anvil is still very close to his family. This is shown through his attendance of his sister Merrily's birthday party[4] during which he gave her a shrunken head as her present. This gift was later shown in Merrily's room, which was filled with ancient artifacts--mostly leaning towards voodoo items and other unusual items. Apparently, according to Merrily, she "raised" Anvil[5].

Retrieved from "https://imagecomics.fandom.com/wiki/H._Percival_Wainright_III_(Top_Cow)?oldid=56611"
Community content is available under CC-BY-SA unless otherwise noted.