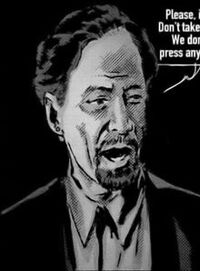 Hanson Lyons is the father of the extremely successful nine year-old actress, Lacey Lyons. Lacey had became the idol of many small girls across the world, particularly to Lily Williams, Twitch Williams' daughter.[1]

Hanson was poor throughout his first marriage, before he had Lacey. He abused his kids, Julia and Mitchell]], both physically and sexually while his wife supported the family financially. Eventually he left them and began a new family with Jennifer Lyons.[2]

On TV one day, Hanson discussed the fame of his daughter. He revealed a personal side of himself and explained how he collected antique pens.[3]

One day, the New York City Police Department was assigned to perform extra guard duty for one of her sets. Twitch and Sam Burke performed guard duty and Twitch wanted more than anything to get her signature to impress his daughter. When they heard a disturbance in her trailer, they broke in and found a man named Sylvester was bothering her. Hanson Lyons jumped in and told them it was Sylvester and he was supposed to stay away from Lacey. He told the police to let him go without charged, but to keep him away.[1]

Later that night, Lacey and her brother, Flynn Lyons argued over playing a game. Hanson showed preference to Lacey as the breadwinner and claimed she would only have a few years in this career before it was over. Later that night, Hanson woke up and murdered his daughter ad sexually abused her after her death.[1]

Sam and Twitch investigated his case. Discovering the pen used for her farewell letter was written in the same vein as a Hollywood contract and the ink was expensive, Twitch began to believe Hanson was responsible for the murders.[3]

After receiving a tip from Mitchell, one of Hanson's previous marriage children, Sam and Twitch received a lead form his ex-wife that he was abusive and may have hurt his children. Sam and Twitch arrived to arrest Hanson but he was already dead. His son had killed him in a struggle when he was confronted with the truth.[4]