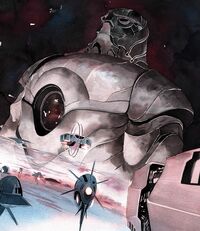 The Harvesters mysteriously appeared over each of the nine planets of the United Galactic Council and nearly destroyed the populations before taking off. Dr. Jin Quon brought forward a theory that their codex could be deciphered and they could be understood. It was only 10 years later that the codex was finally deciphered and realized to be a match with the Tim series of robots that Dr. Quon had allegedly designed.[1]

Retrieved from "https://imagecomics.fandom.com/wiki/Harvester_(Descender)?oldid=55859"
Community content is available under CC-BY-SA unless otherwise noted.