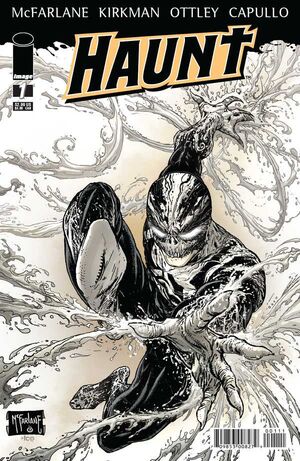 That, in there, I do so that some other poor priest doesn't have to carry the burden of my brother's sins. Outside of there--you don't exist. You're dead to me.

Daniel Kilgore is about to leave his "appointment" with a prostitute, who he sees very often. He pays her, and when she asks if they are going to have another go on Thursday, he says he isn't sure. He starts smoking on his way to church, and it turns out that he is a priest. When Daniel arrives there, he meets someone named Kurt, who tells Daniel that he is late for the confession. In the confession, Kurt says that his last confession with Daniel was three weeks ago, and when Daniel asks Kurt how many people he killed this time, Kurt replies, "Not many".

In Bolivia in a flashback, Kurt uses a pocketknife to cut himself out of a body-bag, which he hid in while pretending to be dead. Kurt communicates with someone on an earpiece, and says that he and the other bodies surrounding him are supposed to be inside a compound, being tested on, so he will have to find a way in. The one on the other end of the earpiece tells Kurt to wait until this is reported, but Kurt says that the "extraction" has to happen now, because the mission is too important. Kurt silently kills a Bolivian sentry guarding the compound, but is spotted by another sentry. Other sentries arrive, and Kurt kills them one-by-one, using the most recently killed as a human shield until he can kill the next one. Kurt grabs a key card from a dead sentry and enters the compound.

Kurt reports in to the one on the other end of his earpiece, who tells him that two more squads are approaching. Kurt finds Dr. Shillinger, who tells Kurt that they need to make a stop before he can be rescued. The Doctor grabs his notebook, and leads Kurt, who he calls "the American", to a secret room in the compound. Shillinger says that "he" responded to the treatment better than any of the others, and if "he" is not taken with them, the Doctor's research will be set back years. Kurt asks how big the body is, and Shillinger replies that the subject is an alive, young Bolivian boy. The Doctor shows Kurt the room, which is full of heavily, gross, mutated Bolivians. The Doctor prepares to grab the young mutated boy when Kurt kills the Doctor in disgust.

The one on the other end of Kurt's earpiece says that he heard a shot, and Kurt says that he just shot Shillinger dead. The one on the other end of the earpiece cannot believe that Kurt intentionally compromised the mission, and Kurt says that the mission has changed to rescuing mutated, innocent hostages. Kurt says they will understand when they find out what Shillinger was doing when he switched from dead bodies to live subjects for testing. Kurt leads the mutated people and the young, mutated boy out of the secret room towards the end of the compound. When they are out of sight, a Secret Agent jumps off the ceiling and grabs the notebook out of the dead Doctor's hands before leaving. Kurt throws a grenade towards the two squads of sentries approaching him and his group, and shoots the survivors. Kurt and the mutated people, including the young, mutated boy, escape.

The flashback ends, and it is revealed that the entire flashback was the confession Kurt just gave to Daniel Kilgore, the angry priest. Kurt says that this time he felt that he did a good thing by rescuing the innocent hostages, but still feels guilty from killing all those sentries, who were just following orders. Kurt can tell that Daniel is still angry at him, so he ends his confession with Daniel. Kurt reveals that he is Daniel's brother, and that Daniel should call their mother. Daniel apparently hasn't spoken to their mother in a while. Daniel says that Kurt Kilgore is dead to him.

Kurt walks out of the church, upset that he didn't reconnect with his brother. Suddenly, a hitwoman paralyzes him, and some other hitmen throw Kurt in a van. Later, Kurt is being beaten up by someone while tied to a chair, unable to move. The man who is beating up Kurt, Frank, asks Kurt where Doctor Shillinger's notebook is. Kurt, who never saw the Secret Agent take it, assumes that it's still in the dead Doctor's hands. Frank tells him that it isn't, and asks where Kurt hid it. Kurt, who apparently has encountered Frank before, says that he honestly doesn't know. Frank walks out of the room angrily, and reports to an evil woman that Kurt is not giving them anything. The evil woman tells Frank to cut off his doohickey and make him watch, and if that doesn't work, she tells Frank to kill him.

Later, Daniel's and Kurt's mother attends Kurt's funeral, because apparently Frank did what the evil woman said. It is pouring outside, so their mother is carrying an umbrella. Daniel is waiting inside a hearse while his mother throws a flower on her son's grave. Daniel starts talking to Kurt's ghost, who he assumes is a result of his imagination. Kurt's ghost tells Daniel to visit Kurt's wife, Amanda. Daniel says out loud that he used to care about Amanda, but Daniel changed that for him. Kurt's ghost tells Daniel that his killers could come after Amanda, and Daniel says out loud that this is all in his head, and that Kurt's ghost is saying this because Daniel secretly DOES want to see Amanda. Kurt's ghost says that their mom is leaving town that night and that Amanda will be all alone. Finally, Daniel agrees to visit her just as his mom enters the hearse.

Daniel visits Amanda's apartment that night on the top of a tall building. Amanda invites him in, and apologizes if she doesn't feel like talking. Daniel doesn't feel like talking either, and they sit there for a long time in silence. Daniel prepares to leave, when Amanda asks him to stay the night. Apparently, she takes sleeping pills, but they are really strong, so even if the building caught on fire she would not wake up. Amanda says she knows Daniel hates her, but she cannot be alone tonight. Daniel grudgingly agrees, and later that night he is woken up by his brother's ghost again. Kurt's ghost tells Daniel that he and Amanda have to leave right now, and two assassins break into the apartment. Daniel tells the assassins to leave and that he is calling the police. The assassins shoot Daniel, and Kurt's ghost tries to push Daniel out of the way.

Instead, Kurt's ghost PHASES INTO Daniel. This causes a bizarre chain reaction that transforms Daniel into some strange-looking creature. When the bullets hit him, they dissolve. Daniel becomes Haunt, and leaps towards the assassins to cut their heads off with his sharp claws. Daniel actually hears Kurt, meaning that the two of them have merged to become Haunt.

Retrieved from "https://imagecomics.fandom.com/wiki/Haunt_Vol_1_1?oldid=53147"
Community content is available under CC-BY-SA unless otherwise noted.