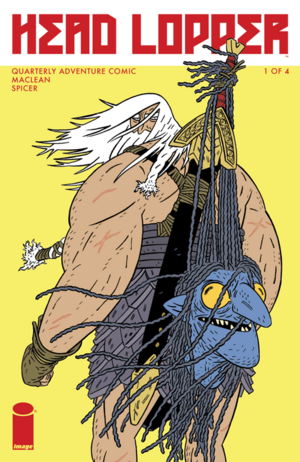 In Castlebay, Norgal the Head Lopper sails a ship. A large sea creature emerges from the sea. Norgal uses his sword but is suddenly eaten. He lops off the creatures head from the inside.

He returns to shore where he meets several clergy men who hired him. They ask if he would consider doing the chore as a donation as they are poor men of the cloth. He spots their gold chain dangling from the leaders neck and grabs it from him as payment. The clergymen damn him as he leaves.

He finds a small boy who agreed to hold his bag for him as he had left. He returns the bag and is told to stay behind as he can't join Norgal on his journeys despite his desire to be his squire.

As Norgal walks down a path, Agatha the Witch complains from inside the bag on Norgal's shoulders. Norgal opens the bag to scold her beheaded head. When she bites his fingers, he kicks her down the path.

Elsewhere, several wolves watch over him and gather together.

Retrieved from "https://imagecomics.fandom.com/wiki/Head_Lopper_Vol_1_1?oldid=51393"
Community content is available under CC-BY-SA unless otherwise noted.