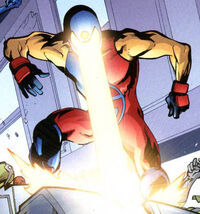 Smasher (real name Hector Chang) is a comic book superhero, a member of the superhero team Dynamo 5, which appears in the monthly series of the same name from Image Comics. Created by writer Jay Faerber and artist Mahmud A. Asrar, Under the codename "Visionary" first appeared in Dynamo 5 no.1 (January 2007).

Hector Chang was the first of Captain Dynamo’s children Warner contacted. Hector is an intellectually curious Vancouver, British Columbia high school geek who has found himself the victim of bullies. When Warner appeared before him offering to change his life, Hector was initially skeptical, stating that he had heard such things before from guidance counselors. Gathering all five of the children together, Warner exposed them to the same unidentified radiation that gave Captain Dynamo his powers forty years earlier, unlocking their powers. Hector inherited all of his father’s vision-related powers. Donning a costume with the same color design as his father’s, Hector took the codename Visionary, and works to protect Tower City with his newly discovered brothers and sisters, whom he is still getting to know.

In their first published mission one month after gaining his abilities, Visionary and his siblings fought the paramilitary organization known as The Veil. Although he and the team acquitted themselves well against that foe, Visionary himself was kidnapped during the fracas, and brought to The Veil’s base, where he was injected with a serum to make him amenable to interrogation by The Veil’s leader, who called himself The Superior. Visionary divulged everything about himself and his siblings, how they inherited their powers, and how Warner assembled them, but before The Veil could make use of this information, Visionary was rescued by Warner and the rest of Dynamo 5, who had tracked him using Scatterbrain’s telepathy. [1]

Recently Hector and his siblings lost their superhuman powers, and in an attempt to restore them, assumed powers that were previously exhibited by another sibling. In Hector's case, he assumed the superhuman strength and durability previously belonging to his sibling Bridget Flynn.

Retrieved from "https://imagecomics.fandom.com/wiki/Hector_Chang?oldid=65953"
Community content is available under CC-BY-SA unless otherwise noted.