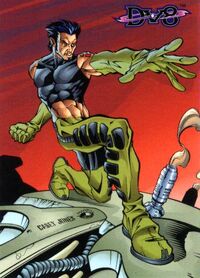 Powerhaus (a.k.a. Hector Morales) was a members of the superhuman team DV8 in the Wildstorm Universe. He was created by Brandon Choi and J. Scott Campbell.

Hector was adopted, raised by an Argentinian farmer as father and mother of German ancestry. Exactly where Hector was raised isn't fully clear, but as best can be determined he spent time living in both Miami, Florida and Buenos Aires, Argentina. He was told that his real parents had died, but in fact Hector was a clone produced by International Operations' Project Rebirth. Out of high school, Hector was recruited for Project Genesis, another I.O. project to find and activate potential superhumans and turn them into soldiers. The project failed when John Lynch interfered, trying to save innocent kids like Gen¹³. Project leader Ivana Baiul was forced to flee, but she took several of the project subjects with her, all cryogenically frozen shortly after their powers manifested. One of them was Hector.

Several months later, Ivana thawed the frozen subjects and started training them as DV8. DV8's first mission was against the members of Gen¹³ and Team 7 during the Fire From Heaven crossover. They were defeated and Ivana retreated with them to New York City. Over the next few months, Hector and his teammates would fulfill any mission for Ivana that increased her powerbase, often at danger to their own lives. For Powerhaus these dangers included being tortured by the CIA in revenge for a mission in which the Deviants had killed several CIA agents. Hector often turned to alcohol to forget the terrible things he had to do on missions and to forget the odd reality his team operated under. Unlike most of his teammates Hector was not very rebellious and very easy-going.

During his time with the team, while sitting in a bar seemingly alone, Hector met another lady whom he soon realized no one else could see and hear. The lady pleaded with him to help find her body. Hector did so, feeding off the spirit's emotions to gain strength. He left the body, and the killer, for the police.

When Ivana blackmailed herself back into International Operations, she took DV8 along to become agents for I.O. as well. While staying at I.O.'s base in McLean, Virginia, Hector ran into I.O. agent Sandra Casey. Hector thought Sandra was very familiar, but she didn't recognize him. A few minutes later, Sandra was killed, apparently in an accident during training. Hector decided to investigate Sandra's death, but was stopped by his superior, I.O. agent Frank Colby. Hector continued his research independently and Colby sent Grifter to stop him. Grifter, having no problem with Hector and disliked I.O., decided to help Hector though and the two returned to I.O. to look into their database. Arriving there, DV8's guardian Sideways Bob helped Hector enter the database and Hector found out that Sandra was a clone, produced by Project: Rebirth. He then found out that he himself was a clone as well. The revelation hit him deep. Over the next few weeks, he began confiding in the comatose Copycat (who later would try to disable the I.O. database because it had made her friend Hector unhappy.)

Hector continued with the team, never telling his teammates that he was a clone. On a mission, DV8 was fighting a villain called the Gnome, who had obtained an Orb of Power. DV8 member Freestyle managed to steal the Orb from the Gnome, but the Orb interacted with her powers and time and space were warped. The events played over again, now in a warped reality where DV8 and Gen¹³ both had a few different members. This time Copycat obtained the Orb and restored time and space to what it should be, freeing Void, who had been imprisoned inside the Orb. Sadly for DV8, the restored reality meant that Powerhaus had died during the mission.

Retrieved from "https://imagecomics.fandom.com/wiki/Hector_Morales?oldid=49901"
Community content is available under CC-BY-SA unless otherwise noted.