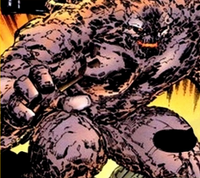 Heinrich Hester was a German mercenary who got exposed to toxic chemicals, thus becoming a being of molten rock and lava known as Slag, a member of the evil trio known as the Troika.

Slag and the rest of the Troika first appeared working for the Gnome, helping him to retrieve the orb from Helspont. After the Gnome was defeated by Emp, the Troika fled.[1]

When the Troika, working for Tapestry, faced the WildC.A.T.s again, Slag defeated their ally Huntsman, but he had to release Huntsman when H.A.R.M. fell on him. Slag quickly stood up again and noticed that Zealot activated the sprinklers of an empty building, a tactic that he mocked until he noticed it was just a distraction while Zealot threw some pellets to make him trip down. When Slag tried to grab something to stop himself, he caught Huntsman's charge Miranda Tai and used her as a hostage, so Zealot used Tapestry's dark power to temporarily turn Slag back into human, and the weakened Heinrich was easily subdued by Soldier.[2]

After H.A.R.M.'s death, Attica and Slag attended his funeral, where they were attacked by Savant's new WildC.A.T.s. Slag didn't fall without a fight, but was finally stopped by Tao dropping H.A.R.M.'s molten body on him.[3]

Attica and Slag were kept in a virtual reality environment[4]. When the WildC.A.T.s found that Tao had caused the current gang war through manipulation, he freed Attica and Slag as a distraction. They weren't sure if it was still the virtual reality, but they decided to kill the WildC.A.T.s anyway. John Colt suddenly appeared and his change of codename further confused them, so they decided to escape to fight another day.[5]

The following time the WildC.A.T.s found Slag, he faced them on his own. He defeated Spartan, but subestimated Voodoo, who used her recently learned voodoo magic to defeat him.[6]

Slag appears in the WildC.A.T.s TV series. His design is simplified due to animation budgets.

Retrieved from "https://imagecomics.fandom.com/wiki/Heinrich_Hester?oldid=68634"
Community content is available under CC-BY-SA unless otherwise noted.