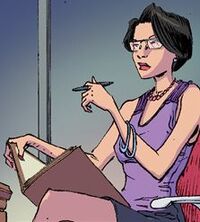 Helena began to research the name Marlinspike when Donna Forsyth overheard her candidate, Jack Northworthy, mumble it in the back of a bus and she became suspicious.[1] She discovered the name was associated with two cults and informed Donna they had murdered people as a ritual.[2]

Retrieved from "https://imagecomics.fandom.com/wiki/Helena_(Citizen_Jack)?oldid=55870"
Community content is available under CC-BY-SA unless otherwise noted.