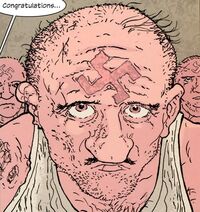 Helmutt Grottrup was a German Scientists researching rocket propulsion. He was kidnapped by Sergei Korolev and taken to Star City where he continued his research. He was branded with a Nazi symbol on his forehead. He succeeded in sending the first man into space, Yuri Gagarin.[1]

This character is a fictional representation of Helmut Gröttrup, a real person. More information on this person can be found at Wikipedia.org.

Retrieved from "https://imagecomics.fandom.com/wiki/Helmutt_Grottrup_(The_Manhattan_Projects)?oldid=61512"
Community content is available under CC-BY-SA unless otherwise noted.