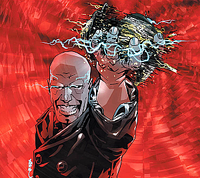 Henry Bendix's past remains fairly muddled, partly because of the existence of an alternate Bendix who has been known to pose as the original. He grew up in Maladyville, Mississippi, raised by his abusive, alcoholic father. It appears that his father more than once killed a girlfriend during a drunken rage. Even as a child, Henry was extremely intelligent, designing the bodily enhancements that eventually led to the creation of the superheroes Midnighter and Apollo while still a child. Henry's diary from this time would mention that he had been contacted by the alien Weavers, who showed him the future. Young Henry was shocked to find out that he would become a villain, but the Weavers told him that till then he could be a hero. Henry killed his father with a self-built energy weapon in order to save his father's girlfriend, Delia. (See notes, as this origin was told in the Monarchy series.)

During the 1960s, he worked for the US government, developing a mobile weapon that was operated through a combination of manual controls and cybernetic uplink. It was dubbed "Think Tank". He was recruited into Team One, a secret task force designed to deal with the emerging Daemonite threat. Team One was dissolved following its first mission. However, the experience gave Bendix a lifelong interest in Earth's secret history. This fascination put him in contact with the villains known as the Four, and led him to discover the interdimensional realm known as the Bleed, among other things. Although he continued to work for the US government, he kept most of his funding for himself.

In 1978, he was appointed to the post of Weatherman One, head of StormWatch, the United Nations Special Crisis Intervention Team. During that time, he was outfitted with cybernetic implants that granted him direct cybernetic link to Skywatch's operating systems. He retained this post until 1994, when he was temporarily replaced by Christine Trelane. He regained his post a year later following the Second Despot Incident. All the while, he continued to explore the world and advance his own, secret agenda.

The Fire From Heaven incident inspired him to take a more proactive approach to peacekeeping. He reorganized StormWatch, firing most of the junior members, recruiting Jenny Sparks, Rose Tattoo and Jack Hawksmoor and placing all members of the original team into inactive duties. He split the remaining memberships into three teams: StormWatch Prime, StormWatch Red and StormWatch Black. Bendix believed that this structure would allow for a more flexible response to post-human threats.

Shortly after StormWatch's reorganization, Bendix was approached by an alternate universe version of him. He offered Bendix a chance to explore the Bleed. In exchange, he asked Bendix to allow him to replace him. This alternate Bendix attempted to shape an orderly world and was killed by Jenny Sparks after he slaughtered members of a superhero team that was attempting to create a crime-free utopia. At the time members of Stormwatch believed this to be the real Bendix gone insane. The new Weatherman Jackson King even believed Bendix' madness was a result of the cybernetic implants (which were part of the Weatherman's job), and refused to have them himself.

After exploring the Bleed and gathering allies, Bendix returned to his world in 2004. Discovering that the Authority was now in charge of America, he devised a plan to remove them from power whilst, at the same time, breaking up the team. His plan was successful. Following that, he assumed control of the shattered Secret Monarchy, the loose coalition of secret groups that run the world behind the scenes. He implemented an active post-human advancement agenda, facilitating integration of Kherubim and other otherworldly technology into American (and to a lesser extent, global) society. In 2008, he faced off against the reorganized Authority. After a prolonged struggle, he was killed by Midnighter.

The alternate Bendix who replaced the original has had a substantial impact on the team as well, though in a much more negative way. Whilst the first Bendix had an undoubtedly ruthless and cold-hearted side, the new one was an entirely self-centred, psychotic individual pursuing an ultra-conservative agenda. He had a bizarre romantic affair with Rose Tattoo, the Spirit of Murder, apparently being attracted to her lust for death and destruction (when a later, evolved Tattoo asked why her poisoned kiss did not affect him, he replied "Because I embrace it.").

As mentioned, the new Bendix was first defeated after attacking a group of superhumans attempting to establish a utopia in South America. Though believed dead at Jenny Sparks' hands, Bendix had in fact escaped to an alternate dimension. There he prepared an elaborate scheme to destroy the Authority, the successors of Stormwatch.