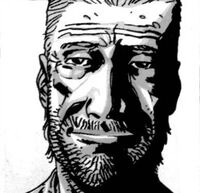 Hershel grew up on his father's farm, even though he never liked it. He became a veterinarian, a dream profession he kept for years. When his wife died, he abandoned that business, having no one to support his business why he did the work on the animals. Then, when his father died, Hershel obeyed his dying wish to return and work on the farm, where he lived with his numerous family for five years before the zombie outbreak started.[1]

Life at the Farm

Hershel's family holed up in the farm, along with the neighbors Otis and Patricia, who decided to take shelter there temporarily, until things came back to normal. The situation extended in time, and they had to face the continuous threat of the "critters" roaming around the area.[1] Refusing to kill them, Hershel decided to lock every zombie he encountered inside the barn, until they could figure out a way to help them, including his son, Shawn, who was bitten before they could put up a barrier around the farm.[2]

One day, Hershel received the urgent visit of Rick Grimes with his wounded son urging for his help. Having some experience with bullet wounds, along with his knowledge as veterinary, Hershel was able to save Carl's life. He then invited the group to stay in the farm while the boy recovered.[3]