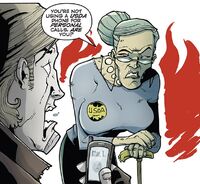 Director Penya is the director for the USDA. She had John Colby transfer into her department and gave him a tough time until he ended up sleeping wiht her to relieve some of the stress.[1]

She became sad when John left her and married Mike Applebee.[2] In retaliation, when they needed the USDA's best agent, Poyo, during a raid on the Collector's compound, she sent in Babycakes instead who was quickly murdered by the Collector's minions.[3]

John visited Mason Savoy in the Our Lady of the Broken Femur Hospital after he was injured by the Collector during a raid. His husband, Mike Applebee, was about to die but Director Penya stepped in to save Applebee's life for John. She had him reconstructed into a centaur. [4]

Retrieved from "https://imagecomics.fandom.com/wiki/Holly_Penya_(Chew)?oldid=53195"
Community content is available under CC-BY-SA unless otherwise noted.